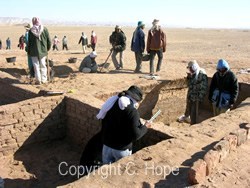 This area lies to the east of Area B and northeast of Area A, the main residential part of the settlement. Area C comprises three low-rise mounds which are separated by shallow depressions.

Unlike other areas of the site where superstructures are found, only traces of mud-brick walls are visible upon the surface in Area C.

Hence, no distinct buildings or complexes can be determined easily. Preliminary examination of the ceramics found on the surface indicated that the occupation of this area may pre-date that of Area A and also be contemporary with the earliest development of the Main Temple of Tutu, in the mid-1st to early 2nd centuries CE.

In relation to C/2 of Area C, the results of the excavations confirmed that it was a domestic quarter in which light industrial activity also took place. This appears to have comprised pottery manufacture, iron smelting and possibly the manufacture of glass and faience.

Textual data and the majority of the ceramics encountered indicate a period of use in the 2nd century, though some of the ceramic material may date to the Ptolemaic period. 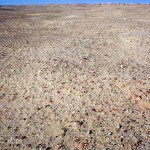 This designation represents the western mound of Area C. Two building complexes are indicated by plan and appear to be separated by a laneway. Overall the complex draws a parallel to the complexes of Area B. The large multi-roomed structure (C/1/1) in the south of this location was chosen for excavation. It measures 12m x ... Read more

The general layout of the buildings in this section of C/2, as is the case in C/1 also, differs from the other residential buildings already studied in Area A, which date from the late 3rd to late 4th centuries CE. Large areas of contiguous structures which comprise open courts flanked by smaller, rectangular rooms with ... Read more 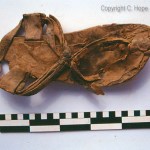 The state of preservation of structures on this mound is identical to that of the central mound. The surface finds between both zones is homogenous and like the central mound, this eastern mound provides evidence of the technological workings of metal and pottery in the vicinity. The density of iron slag upon the surface is ... Read more