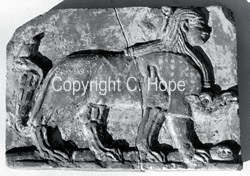 Excavations in this area were conducted over the course of about ten field-seasons, in the years between 1991 and 2002. 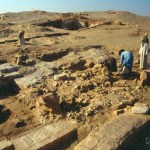 Kellis was the cult centre for the worship of the god Tutu (Tithoes), his consort Tapshay (Tapsais) and mother Neith. This temple is the only surviving one dedicated to Tutu, who warded off evil and is represented either as a sphinx or in human form. The temple complex and its ancillary buildings occupy a sizeable ... Read more 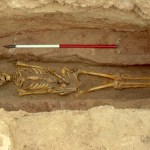 This enclosure is the last of a series of additions on the north of Enclosure 1. Before Enclosure 4 was constructed, the monumental West Tombs occupied this space. The West Church Complex was added in the mid-4th century; its western and northern walls form part of the walls of Enclosure 4. Within the enclosure and ... Read more 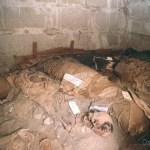 The West Tombs are located within Enclosure 4 (Area D/7). These tombs were monumental and constructed in classical style. They pre-date Enclosure 4 and were probably built during the first centuries of Roman rule. Only parts of their sandstone pavements remain, which were built upon mud-brick platforms and approached by flights of sandstone steps. The ... Read more

This church complex (D/6) is located in the northwest corner of Enclosure 4. The mud-brick structure comprises a small two-roomed church (15m x 7m) and several rooms to its south in an ancillary structure. Both components are roughly equal in size and the church is accessed by the south rooms. The state of preservation of ... Read more 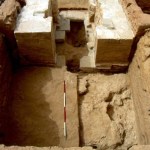 The West Temple is situated on lower ground behind the main temple and is separated from Enclosure 1 by a 4m wide lane. Both temples share a similar orientation to the east, but their axes are notably different. The West Temple, dedicated to Neith and Tapshay, has its own temenos and the complex as a ... Read more