This church complex (D/6) is located in the northwest corner of Enclosure 4. The mud-brick structure comprises a small two-roomed church (15m x 7m) and several rooms to its south in an ancillary structure. Both components are roughly equal in size and the church is accessed by the south rooms. The state of preservation of the complex varies; the west and north walls are heavily eroded, but the south wall of the nave and those of the ancillary rooms are better preserved.

The church comprises a nave with an apse, a west room which presumably functioned as a narthex, and a magazine (Room 8) connected with this room. A wide corridor opens off the north wall of Room 1 and provides the approach to the church; i.e., through Room 2. Each end of the corridor had wooden doors.

A plan of the West Church Complex

Both the nave and the narthex have high benches which line the interior walls and the nave was closed off from the narthex by a wooden door. The apse, which was built at the east end of the nave, is raised and flanked by columns set upon pedestals. In front of the apse is a bema (ceremonial platform) which is approached by steps and to the sides of the steps are graves. Small chambers are situated on both sides of the apse. The north chamber has three storage bins, one of which contained large sheets of blank papyrus.

The ancillary rooms may have served various purposes, but the functions for only Rooms 1, 2 and 8 seem clear. Room 1 provides access to the whole complex and was lined with benches. It is also possible that the flight of steps in the north wall of Room 1 gave access to the rooftop. The narthex is accessed via Room 2 and Room 8 probably served as a magazine. All of the rooms except for these three have niches.

Artefact finds in the church were few. The objects were varied and included complete ceramic vessels, coins, an incense burner, ivory knobs, basketry, sherds from glass vessels and seal-impressed mud jar sealings. Many ostraka were found and the majority of these recorded economic transactions. Fragments of inscribed papyrus and a large piece from a codex were also retrieved; the latter containing parts of two personal letters. Based on a study of the numismatic evidence, it appears that the church was established after the mid-4th century and was operational until the 390s.

Read more about the West Church in this related article:

View of the nave and apse showing roofing debris encountered during the excavations, looking northeast. 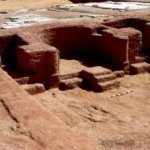 View of the apse after excavation, looking southeast. 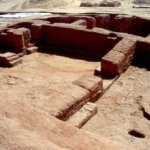 View of the nave and narthex after excavation, looking southeast. 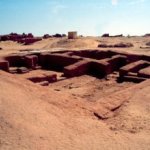 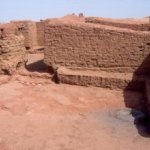 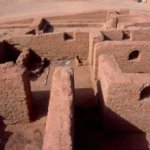 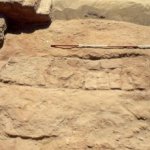 View of one of the graves found in the nave beside the steps to the apse. 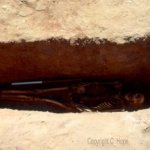 Skeletal remains of an adult found in the grave beside the steps to the apse. The body is orientated east-west with the head at the west.