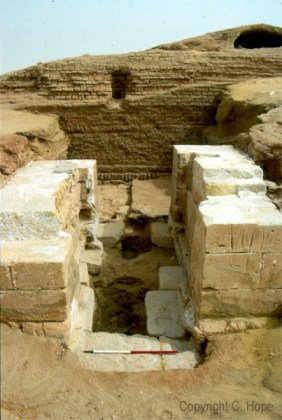 East Gateway of the West Temple Complex after excavation, looking east and showing the back wall of Enclosure 1

The West Temple is situated on lower ground behind the main temple and is separated from Enclosure 1 by a 4m wide lane. Both temples share a similar orientation to the east, but their axes are notably different. The West Temple, dedicated to Neith and Tapshay, has its own temenos and the complex as a whole measures 31m x 17m. The pronaos and naos were initially a free-standing rectangular structure (5.1m x 8.2m) built of coursed sandstone; the corner blocks finished with square vertical mouldings.

The outer jambs of the axial doorways, which supported double leaved doors, were decorated with scenes of inscribed relief. On the pronaos, the scene preserved in sunken relief depicts the figure of a king wearing a red crown, white kilt, blue belt, ceremonial tail and collar. The king strides forward holding a staff and mace in one hand and makes an offering gesture with the other. Hieroglyphic inscriptions in front of the king contain cartouches, but these are obscured by a thick encrustation. On the opposite jamb, the king is depicted with a white crown. Although the cartouches on this side are damaged, they are legible and preserve the words ‘pharaoh’ and ‘given life’, most probably from a generic titulary for ‘Caesar’.

On the naos doorjambs, the decoration was executed in raised relief. The main panel shows a female figure wearing a tight sheath dress with fine blue stripes, an armband, long hair curled behind the shoulder, a vulture head-dress and a lotus crown. Both of her arms are raised in offering to a goddess who wears a sheath, plain collar, lappet hairstyle and vulture head-dress, and holds a lotus staff andankh sign. The goddess on the right jamb is depicted wearing a composite red crown and that on the left jamb is shown wearing a composite crown with sundisk, plumes and Hathor horns.

A larger mud-brick structure had been built to enclose the pronaos and naos; however, this was done before the dressing of the exterior surfaces of the sanctuary was finished, perhaps deliberately. In front of the sandstone sanctuary, a small mud-brick forecourt flanked by chapels was added. To the north of the sanctuary, a corridor provides access to a rear court and subsidiary rooms. It also provides access to a ‘contra-temple’ which was built at the rear of the sanctuary. The last major construction phase detected in the temple complex is the outer temenos. Its eastern half provides a broad court that may have been colonnaded and the main east gate, built of sandstone, is flanked by projecting towers or gaterooms with other small rooms incorporated into the east wall of the temenos. In the western half of the temenos, two large side chapels occupy the corner spaces and are integrated with the subsidiary rooms. 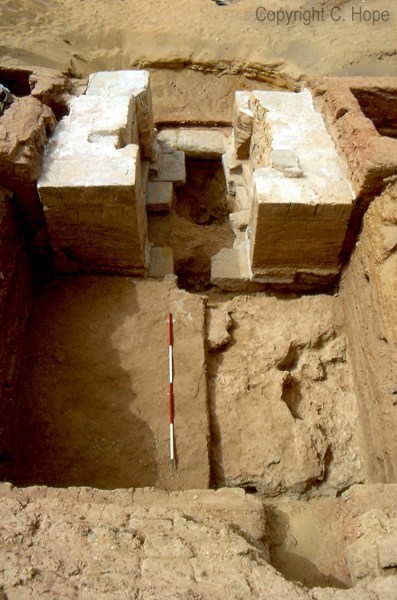 The stone blocks comprising the main east gate were undecorated and the gateway itself is preserved only to a height of 1.4m above its stone floor. Excavation of the gateway revealed that its foundation was cut and set into the basel clay. The adjoining temple enclosure was also built in the same way and both were constructed at a time after the West Temple was first in use as well as after the building of Enclosure 1. During the investigation of the temple complex, few objects were found that relate to the original use of the temple. Most artefacts were of seemingly domestic nature and attest the use of the area for non-religious purposes in the second half of the 4th century CE.