This group of tombs occupies the northwestern edge of the settlement. The ground plans of up to 20 monumental tombs are known, including the largest and most elaborate, North Tombs 1 and 2. This series of mud-brick mausolea are aligned roughly in a single row which extends towards the northernmost area of the site. Other tombs are traceable nearby to the west and south and probably belong to a second parallel group, but these are only preserved to the lower courses of their walls.

Excavated localities are represented by the highlighted zones. 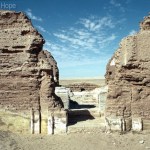 This structure is the largest of any occurring in the North Tomb Group and is located at the southern end of the group, isolated from the remainder. In 1908, H. E. Winlock visited the site and he recorded the monument in a series of photographs. Those taken within the structure revealed that the central chamber ... Read more

This tomb was also photographed by Winlock during his visit to the site in 1908. Excavation of the tomb, led by Monash University, was conducted between 2000 and 2001. North Tomb 2 is situated 25m to the north of Tomb 1 and its architecture represents a simplified version of the latter. The tomb has three ... Read more

Tombs 5, 6, 7 and 16 were excavated in 2004. Each tomb was constructed in mud-brick and comprised of two or more vaulted rooms. In some cases, the vaults are preserved; in others not, and whole sections of wall are noted to be missing from many of the structures overall. Most of the tombs were ... Read more 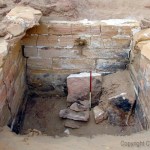 This structure is situated apart from the line of brick mausolea of the North Tomb Group and may be one of several such tombs in this part of the site due to scatters of sandstone noted upon the surface. Clearance of surface rubble and sand revealed a single chamber (2m x 4m) made from regularly-cut ... Read more