This tomb was also photographed by Winlock during his visit to the site in 1908. Excavation of the tomb, led by Monash University, was conducted between 2000 and 2001. North Tomb 2 is situated 25m to the north of Tomb 1 and its architecture represents a simplified version of the latter. The tomb has three chambers (Rooms 1-3) which all open off a transverse hall (Room 4) entered through the centre of its eastern wall. It was also provided with a small porch (Room 5). The doors of the tomb were probably made of wood given that numerous iron nails from their construction were found. Room 2 had door pivots indicating that it had double-doors while the other rooms only had a single door.

The core of the tomb is approximately 10 square meters; it has a height of just below 5m and is situated upon a platform. Externally, the walls were white-plastered and feature elements such as battering, cavetto cornices and torus mouldings, corner mouldings, and had pilasters framing the entrance into the tomb – most probably supporting a cavetto cornice as well. Rooms 2 and 3 are both of sandstone with stone-paved floors and possibly once had stone vaults. Only the lower parts of the walls survive.

Fragments of a sandstone cavetto cornice as well as painted sandstone preserving part of an image of a solar disc flanked by uraei were found in Room 4. These elements undoubtedly originate from above the doors into Rooms 2 and 3. Rooms 1 and 4 are constructed in mud-brick and both have barrel-vaults; yet Room 4 has a stone-paved floor, which was coated with a layer of plaster like the others. All external walls are mud-brick and a parapet wall extended above the roof of the tomb. It appears that the tomb was constructed in a single phase and unlike in Tomb 1, there is no evidence of changes to the floor level.

A plan of North Tomb 2

The floor of Room 1 had been dug up, apparently by robbers. Within the back-fill were several sandstone paving slabs, fragmentary sandstone offering tables and the burial remains of a child. Human remains were found above the floor in Room 2. Some of the skeletal remains were orientated east-west with heads on the east, but it is uncertain if this represents their original placement as there was evidence for extensive disturbance throughout the tomb. The matrix in which these bodies were found also indicated that it derived from an episode of looting and destruction. The burials were accompanied by a small selection of objects including pottery and a sandstone offering table. The pottery included bowls that may be ascribed to the 2nd to 3rd century. Fragments of decorated cartonnage were also discovered as well as burnt and gilded wood that clearly derived from either a coffin, a shrine or a box. An intrusive burial containing an infant wrapped in linen was found in a pit which cut through one of the other burials. Room 3 witnessed a fire of considerable temperature that reduced much of the burial furniture to charcoal and transformed parts of the human skeletal material into a substance resembling glass. Other items found included decorated cartonnage, a plaster eye socket with glass inlay, a moulded glass heart scarab, and pieces of offering tables.

Amongst the low fill of the transverse hall the fragments of a polychrome-decorated, inscribed wooden funerary bed and box were found. The figures represented were of Horus, Anubis and Duamutef. Other polychrome wooden fragments found in various places of the same room include part of a boat with winged uraei and kneeling figures that seem to represent the Souls of Pe and Nekhen. The fragment of a polychrome box was also found featuring a figure of Imsety and a portion of a hieroglyphic text amongst other decorative elements. Additionally, pieces of several carved, sandstone offering tables were found distributed throughout the tomb. A provisional study of all the objects suggested dates for the burials within the 1st or 2nd centuries. Remains of several other human bodies were located in Room 4; some of these preserving tissue and elaborate bandaging. The room was found to contain 3 graves positioned against walls, but none were original as they were cut into the foundation trenches of neighbouring walls. Each grave originally contained a single burial within a ceramic coffin. Two of the burials were found to be disturbed and poorly preserved. The other burial was found in a better state of preservation. It contained a well-wrapped female placed within a coffin, but the head was found disarticulated and partly unwrapped. Well-preserved basketry sandals were attached to the exterior at the foot end and a wooden ‘mummy label’ was secured to the body. The label provides the identity of the deceased: “Senpsais, daughter of Thatres”.

It seems that the original burials, represented by the finds, were placed in the rear chambers and at least one was laid upon a funerary bed, and they were accompanied by ceramics and offering tables. At least one of these burials was within a painted cartonnage coffin. The burials in the ceramic coffins denote a second phase of burial within the North Tomb 2. The single burial in Room 1 is undated. At least 32 individuals in total were located in the tomb. A tentative reconstruction of the main phases in the desecration and destruction of the tomb is possible. Following the secondary use of the tomb for burials in the ceramic coffins, destruction and burning of the original interments occurred. This took place simultaneously in Rooms 2 and 3, but some skeletal material was thrown into Room 4 along with broken wooden furniture before the burning. At this time, the secondary burials in the floor of Room 4 were broken into and despoiled. An episode of sand accumulation followed during which further disturbance of the skeletal material occurred and objects were broken. Another phase of vandalism followed this in which pits were dug through the sand to sections of the floor, paving stones in Rooms 2 and 3 were removed and pits were dug into basal clay below. Some of this material was redeposited on top of the sand accumulation in Room 4. There was another phase of sand fill before the brick structure of the tomb began to collapse. 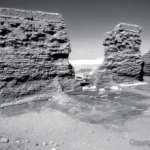 A view of the entrance into the tomb and remains of its portico, looking northwest. 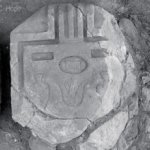 A sandstone offering table that was found on the floor of Room 2 in North Tomb 2 (Object Registration Number NT2/5). 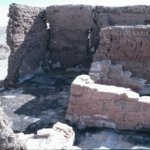 The eastern end of the tomb showing Room 4 with Rooms 2-3 on the right, looking southeast. 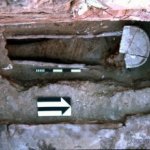 The mummy of Senpsais in her coffin in Room 4 of North Tomb 2, looking west. 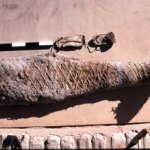 The mummy of Senpsais and her sandals after excavation. 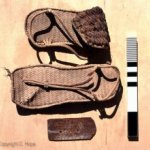 Detail of the sandals and name tag belonging to Senpsais. 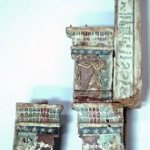 Fragments from one of the short ends of a funerary bed (Object Registration Number NT2/35). 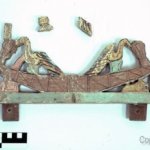 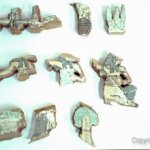 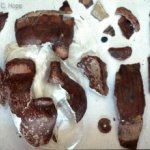 Fragments from a painted cartonnage coffin or coffins from North Tomb 2; face from Room 2 near Body 2 and the hand from Room 3. 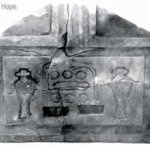