Tombs 5, 6, 7 and 16 were excavated in 2004. Each tomb was constructed in mud-brick and comprised of two or more vaulted rooms. In some cases, the vaults are preserved; in others not, and whole sections of wall are noted to be missing from many of the structures overall. Most of the tombs were also provided with a portico. The excavations have provided invaluable information concerning burial practices at Kellis. The lack of evidence for burials within subterranean chambers confirms suggestions made subsequent to the excavations of North Tombs 1 and 2 and South Tomb 4. Original burials appear to have been above ground and within the closed inner chambers of the tombs.

Artefacts from the tombs demonstrate the use of traditional funerary items datable somewhere within the first three centuries CE. Tombs 5, 7 and 16 were probably constructed prior to the late 3rd century while Tomb 6 may have been a relatively late addition. Some of the interments with this tomb attest a distinct burial practice: unwrapped body with no grave goods placed in a roughly-cut, shallow pit orientated either north-south or east-west. It may reflect the burial of an individual with low socio-economic status. Some of the interments within Tomb 16 attest that same tradition. Interestingly, none of these tombs witnessed re-use during the period when burial practice required that graves be oriented east-west with the head placed on the west, as found amongst intrusive burials in North Tomb 1 and throughout the cemetery east of the settlement, and which conforms to Christian beliefs.

Tomb 5 measures 6.9m x 7.2m and it preserved to a height of 2.9m on the south. Its portico extends 2.85m to the east and is 2.57m wide. The north and south walls were ornamented with false doors topped by cavetto cornices, and the corners originally supported torus mouldings. On either side of the door into the tomb are raised jambs which may have been topped by a cavetto cornice above the door. No sealed deposits were found inside the tomb and the three human bodies that were discovered appear to be intrusive. Patches of blackening occur on the walls and floors indicating one or more periods of burning, perhaps related to secondary use of the tomb. The artefacts found included elements of painted wooden funerary furniture, a ceramic lamp with palm frond decoration (typically datable to the 3rd and 4th centuries), intact ceramic vessels, fragments of glass and faience vessels, and a painted wooden wreath found near to a child’s body. Beneath the western wall collapse, an intact mummy board was discovered.

A split plan of the North Tomb Group

Tomb 6 postdates Tombs 5 and 7 as it was built within the intervening space of 5.2m. It comprises three rooms and was provided with an entrance portico. The tomb was filled with deposits of wind-blown sand, mud-brick collapse and organic material, but no sealed deposits were encountered. The floors and walls of Rooms 1 and 2 were mud-plastered while in Room 3, gypsum-plaster was used. Wooden doors once featured in the tomb, as in the other tombs, and are indicated by the remains of wooden doorsills. Large quantities of human remains were recovered from the tomb and those in Room 1 were disarticulated, which included 12 skulls. Amongst the artefacts found in this room were linen bandages, fragments of ceramic coffins, a possible statue base of stone and a painted wooden arm belonging to a figure that may have represented one of the divine mourners, Isis or Nephthys.

In Room 2 human remains were discovered in two separate horizons. The upper one generally contained disarticulated and sometimes burnt remains. A group of four bodies with associated ceramics was found within rubble at the south end of the room. Below this context another rubble fill was encountered with evidence of burning. Large quantities of disturbed human bones were found amongst this lower context. The intact body of a child and the headless body of an adult whose legs were tied together at the ankles with rope were found in the centre of the room between the doors. These bodies were orientated approximately east-west, although it is not certain whether this was their original position. Many artefacts were also found and included possible bouquets.

At the floor level below the upper contexts, a series of pits had been cut into the basal clay underlying the site. Nine pits were apparent, some oriented north-south and others east-west in alignment with the walls and between the doors of the room. Several of the pits contained intact or disturbed bodies, often with well-preserved tissue. It is possible that some of the human remains found in the upper contexts originated from some of the pits. Those bodies within the pits generally showed no signs of wrapping and there were no grave goods deposited. At least 13 individuals were identified as having been buried in Room 2. The disturbed nature of the material within Tomb 6 makes a reconstruction of the sequence of events difficult. The pits in Room 2, however, appear to be secondary as there was no evidence found to suggest that they had been covered over except by rubble. The majority of the ceramic material found within Rooms 1 and 2 can be paralleled to material from the houses of Area A dating to the late 3rd and 4th century. A few diagnostic pieces indicate an earlier date within the 3rd or even late 2nd century, however. Certain bowls found in the portico area of the type regularly used to close large jars before they were sealed with mud may be assigned to the 2nd or 3rd century; two mud-seals were found with them.

Tomb 7 comprises five rooms, one of which is a transverse chamber, and was provided an entrance portico on the east. The tomb forms a block measuring 9m x 8.9m and its portico (3.5m wide) projects 3.25m to the east. The maximum preserved height in the centre of the tomb is 3.2m and the entire west wall has collapsed. Evidence of burning inside the tomb was apparent as well as recent re-use of the structure as a stable for a donkey. Only one intrusive burial was detected; that of an infant associated with a niche cut into the east wall of Room 1.

Tomb 16 is situated a short distance to the north of Tombs 5-7. It is of similar size to Tomb 7, measuring 9m x 8.7m yet with an internal height of 1.8m. Like Tomb 7, Tomb 16 also includes a transverse chamber, but lacks an entrance portico. Alterations to the internal room arrangement are apparent. The tomb was mud-plastered throughout and has mud-plaster floors, all of which have been disturbed by intrusive cuts. The fill beneath wind-blown sand deposits showed that the tomb was also used for the stabling of donkeys. A total of six human bodies were excavated in the northern part of Room 1 and all appear to be secondary. The bodies were found to have either been laid upon the partially-disturbed floor or within a shallow grave cut into the floor against the east wall.

Adults and children were amongst the bodies and in Room 5, an additional quantity of disturbed, disarticulated human remains was found. In Room 2, a considerable amount of linen wrappings were discovered. The ceramics from the tomb can all be assigned to the 2nd or 3rd century, except for one decorated bowl of the late 3rd to 4th century. 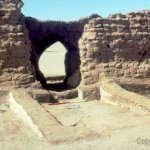 A view of the entrance and portico.

A view of the vaulted rear rooms with the back wall missing. 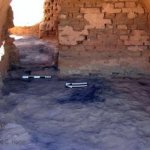 One of the vaulted rear rooms, post-excavation. 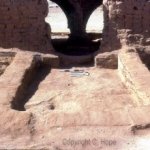 Detailed view of the portico. 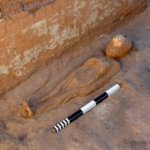 An infant burial in Room 1. 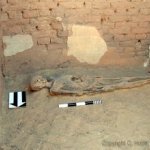 An adult burial in Room 1. 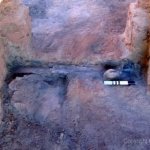 Doorway to Room 2, showing the burnt wooden threshold and an oil lamp in situ. 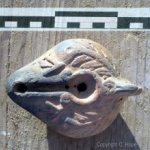 A group of bodies located with the upper burials in Room 2.

A group of bodies located with the upper burials in Room 2.

Lower burials situated in pits at the north end of Room 2.

The lower burials situated in pits, looking across Room 2.

The portico and entrance to Tomb.

The portico and entrance to Tomb 7.

Angled view of the portico and entrance to Tomb 7, showing also the alignment with Tombs 5 and 6.

View of the vaulted rear rooms with the back wall of the tomb missing entirely. 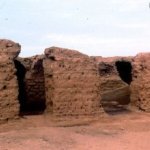 The entrance ways to Tomb 16, which does not include a portico. 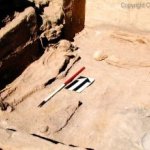 Infant and adult burials in Room 1. 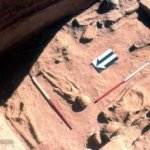 Infant and adult burials in Room 1, showing the whole area of the room. 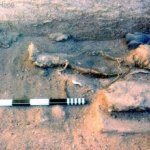 An infant burial which was found to be positioned on top of an adult. 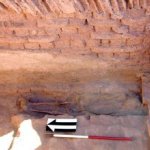 The adult burial in Room 1 found beneath an infant and covered by a shroud. 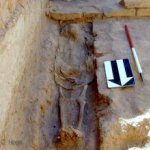 The adult burial in Room 1 found beneath an infant and covered by a shroud, showing the floor cut in which the interment was made.