Carlo Rindi Nuzzolo, researcher at the Centre for Ancient Cultures, Monash University, was granted a Marie Skłodowska-Curie Actions Global Fellowship. He will join the Department of Near Eastern Studies (NES) in Berkeley for two years, and then will be hosted for another year at the Institute of Heritage Science in Italy (ISPC) of the National Research Council of Italy. The funding programme is highly-competitive and is part of the European Union Framework to foster excellence in research and innovation, encouraging mobility outside Europe.

The CRAFT project Cartonnage Regionalism in the Ateliers of the Fayum Territory, aims to investigate Graeco-Roman funerary cartonnage from the Fayum Oasis, Egypt in international museums (e.g. Manchester Museum, Museum of Fine Arts in Budapest, Petrie Museum). With a multi-disciplinary approach, 3D reconstructions, and archaeometric investigations it will improve our understanding of the artefacts and the socio-cultural context of their production. The research uses the methodology developed during Rindi Nuzzolo’s PhD thesis at Monash’s Centre for Ancient Cultures, which investigated the Graeco-Roman cartonnage manufacture at Ismant al-Kharab, identifying local traits and features in the decoration, as an expression of the regional tradition. 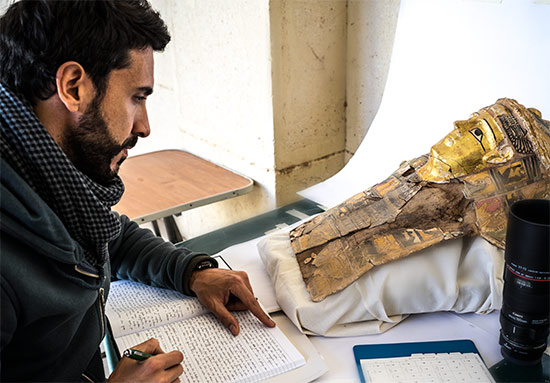