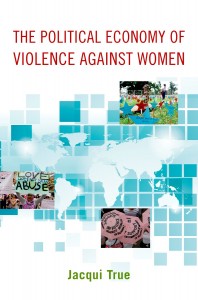 True’s book frontally addresses this disjuncture by driving attention to the economic and political discrimination against women, and economic inequalities in general, and offers a structural explanation for violence against women. She provides empirical evidence that supports theoretical arguments about the interdependency of rights and that challenges the false separation or compartmentalization of the public and private domains.

True rejects any “cultural” arguments that condone practices judged by women’s movements and human rights defenders to be abusive or violent to women. Political economy, rather, lays bare the material foundation and underlying vested interests of many cultural norms and practices.

Theoretically sound and empirically grounded, this book merits particular attention in light of the fact that policy change is unlikely to succeed without societal support. The Political Economy of Violence Against Women is one of the most authoritative accounts of women’s rights in an age of globalizing economy.

Looking to the future, the book offers valuable policy alternatives and strategies. It is with great pleasure that the committee members have chosen this book as the winner of the 2012 APSA best book award in human rights.'