The United Kingdom’s momentous decision to leave the European Union and the eventsfollowing this decision have profound implications for understanding both democracy andinternational negotiations far beyond Europe. The UK Conservatives promised a referendum on the UK’s membership of the EU in their 2015 election manifesto. The Brexit referendum of 2016, however, is often seen as an example of a more general rise in populism across many established democracies. This raises important questions for democratic representation. What distinguishes populism from normal politics? How likely are politicians in general to keep the promises they make to voters, and is promise-keeping a good thing? Following the referendum result, the ongoing negotiations on the terms under which the UK will leave the EU are among the most complex international negotiations ever conducted, and some observers say they are doomed to fail. The lecture will discuss some of the main issues on the agenda, the positions taken and the people involved. We will consider the prospects for agreement and lessons for negotiators in other settings. The lecture will draw on recent observations of the Brexit process, and relevant political science research on democracy and negotiations.

PRESENTER:Robert Thomson is Professor of Politics and Head of the School of Social Sciences at Monash University. He moved to Melbourne in July 2017, having previously held positions at the University of Strathclyde in the UK, Trinity College Dublin, and at the Universities of Groningen and Utrecht in the Netherlands. His research focuses on democratic representation and negotiations at the national and international levels. His publications include the books The European Union Decides and Resolving Controversy in the European Union (both Cambridge University Press), and a series of articles and book chapters on various aspects of national and international politics. 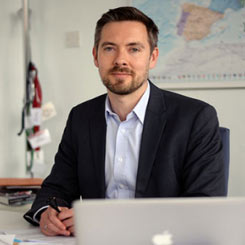 Entry to the Village Roadshow Theatrette entry 3 is via La Trobe St.