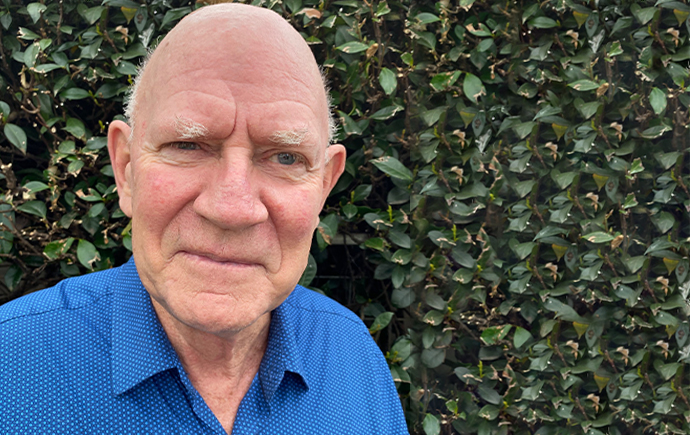 In 1961, students may have baulked at the thought of joining the very first cohort of a brand-new university. But not Ian Dudgeon.

Young Ian, as did most in initial entrants, came straight from secondary school with an open mind and keenness to explore new frontiers, that in decades ahead would steer him through diplomatic postings in Malaysia, Chile, Thailand and Japan.

He was one of approximately 60 students enrolled in the Bachelor of Economics under Professor Donald Cochrane, the pioneering Dean of the Faculty of Economics and Politics.

Professor Cochrane would lift his student numbers to 1400 within seven years, making it the largest economics faculty in Australia.

But in 1961, the muddy Clayton campus’ untested waters were what challenged Ian Dudgeon the most.

“Part of it was the excitement of starting in a new uni,” Mr Dudgeon recalls. “There was a sense of adventure – we were building a university.”

A large building site in the middle of a series of open paddocks, it was quickly dubbed ‘The Farm’. Enrolment was in the Vice-Chancellor’s garage.

But this sheer newness afforded certain advantages – the tuition as “almost one-on-one - a highly appealing factor compared to being an anonymous blob in a larger lecture theatre somewhere”.

“That was a really great period of time. You could be very much yourself, and interact with academic staff who were (themselves) keen to develop an institution,” Mr Dudgeon remembers.

The idea of a pure economics degree inspired him more than “the closest option” of a Bachelor of Commerce at the University of Melbourne. “It was a holistic degree that included politics. I saw the merger of those two as a more realistic amalgamation in terms of what I wanted, and where my future would take me,” he says.

After his graduation in 1964, Mr Dudgeon joined Ford Motor Company Melbourne’s trainee program, working in industrial relations. He moved on to the Department of Defence in 1965 before joining the Department of Foreign Affairs and Trade in 1968. There he contributed to the development and implementation of national policy around Australia’s international political, strategic and economic interests, and undertook several diplomatic postings.

During 1995 - 1997 he was seconded to the Department of Defence’s then Defence Signals Directorate where he led Australia’s initial project to identify national security and related policy aspects of our increasing dependency on cyber systems.

"Always be willing to seek advice on degree and career options, then go with your instinct. The most important person you must answer to is yourself."

Mr Dudgeon took early retirement from government in 1997, ending a 32-year career there, with16 years as a member of the senior executive service.

He then launched his own consultancy, developing a large number of private and government clients and providing project services in areas including international security issues, cyber and corporate services.

Retiring from paid work in 2018, he remains involved with various international affairs think-tanks and is a former ACT president, and now presidential associate, of the Australian Institute of International Affairs (AIIA).

Mr Dudgeon has written more than 70 publications on international issues and lectured widely at conferences and at academic and other institutions on related issues in Australia and overseas. He is also a graduate of the Australian Institute of Company Directors (GAIDC), and has attended a residential advanced management program at Harvard Business School.

Mr Dudgeon left his mark on Monash in multiple ways.

While Monash in its first year had no stultifying tradition, in 1961 it was also bare of the clubs and societies that distinguished other universities. So many of the new students – Ian included – made their creation a top priority, “laying the building blocks of tradition that would grow and be shaped by future intakes”.

Mr Dudgeon and fellow student Tony Reyntjes were the founding editors of Monash’s first student newspaper. The first edition, published in the first week of April 1961, was nameless. “But after quick campus-wide consultation - easy to do given our size - the second edition published on 13 April was named Chaos.”

“First editions were published weekly, then fortnightly. It was a crude start by today’s standards, but it was effective then,” Mr Dudgeon says. Chaos was renamed Lot’s Wife in 1964, and is now a Monash student institution.

He was also a founding member of the ECOPS (Economics and Politics) Society and its inaugural Secretary, with fellow students John Howell as President and Alan Suss as Treasurer.

“Everyone wanted to create something,” he recalls.

While ECOPS has now been superseded by more specialist clubs like the Economics Students’ Society, back in 1961 “ECOPS was strongly supported by students and academic staff alike, and became one of the most active societies on campus,” Mr Dudgeon says.

“We essentially focused on bringing in guest speakers who would otherwise not be part of the academic program – and that (in turn) brought more diversity.

“The high-level support from the Dean and other academics...was important in helping to shape the kind and quality of activities pursued in order to best complement our studies, and contribute to our broader development.”

“Monash opened a very wide door of diverse opportunities, both for me personally and for all of us collectively,” Mr Dudgeon says.

His advice to future graduates is based on a fundamental tenet he learned during those early years in Clayton.

“University opens the door to opportunity. Always be willing to seek advice on degree and career options, then go with your instinct. The most important person you must answer to is yourself.”

And “while individual effort and initiative are very important, most goals in life are obtained through teamwork, he says.

“That, I believe, was my strongest life lesson learned from those early days at Monash.”