Prices, spatial prices and their implications for welfare comparisons

In the past few years, Ranjan Ray has been engaged in research on welfare effect of movements in prices and intranational (i.e. spatial) differences in prices with special reference to inequality and poverty rates. His work on prices has been conducted on Indian, Australian and Italian data sets. His ongoing research on spatial prices has been published in the American Journal of Agricultural Economics, Review of Income and Wealth, Journal of Development Studies and Macroeconomic Dynamics.

In a paper that was presented recently at the 60th scientific meeting of the Italian Society of Economists in October, 2019, Ranjan Ray in collaboration with Verona based economists, Federico Perali, Martina Menon and Nicola Tommasi, investigated the effect of regional differences in prices on poverty rates and standard of living comparisons.

The tale of the two Italies: everyone knows it, nobody wants to hear it

The tale of the two Italies, which tells of the differences in the cost of living between northern and southern Italy, is a story that is directly perceived by every southern Italian who visits the north and by every northern Italian who visits the south at the time he is about to put his hand in the wallet. It is a story as old as Italy which boasts many authoritative storytellers even in recent times (Campiglio 2006, Alesina and Giavazzi 2007, Biggeri, Brunetti and Laureti 2008, Amendola and Vecchi 2017, D’Alessio 2017, Boeri, Ichino, Moretti, and Posch 2018). Alesina and Giavazzi, in particular, present the traditional incipit of the story. Public employment would represent an inefficient system to support Southern Italy because public employees, who are much more numerous in the south, receive the same salary as their peers in the North, although the cost of living in the south is much lower. Even though ISTAT does not publish official statistics on the differences in the cost of living in the Italian regions, several studies estimate that the average difference in the cost of living between North and South is around 20-30 percent. It follows that the purchasing power of public wages is much higher in the South. The heart of history has deep roots in economic theory. The north-south divide in purchasing power in Italy can be explained through the lenses of the Balassa-Samuelson effect which argues on the basis of productivity differences that consumer prices tend to be higher in developed countries than in developing countries. The study by Menon, Perali, Ray and Tommasi extends that argument to the case of price differences between the affluent North and the less affluent South of Italy.

Given this gap, one of the highest in the world, it seems legitimate to wonder why the northern public employees do not go and live in the south. The difference in the quantity and quality of public services is certainly a factor that conditions the choice, although it is easier said than measured. According to a recent study presented in Palermo at the 60th scientific meeting of the Italian Society of Economists (The Tale of the Two Italies: Regional Prices for Accounting for Differences in the Quality of Services by Menon, Perali, Ray and Tommasi 2019) the answer lies partly in the superior quality of services in the North and partly in the severe limitation of job opportunities, particularly for women, in the South. 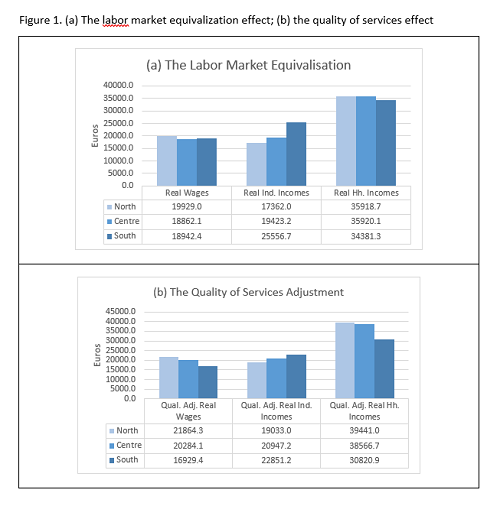 While wages expressed in real terms are very close in North and South Italy (Figure 1.a), real individual incomes are significantly lower in the North. The North-South divide almost disappears when we refer to the total available real family income. This is because the labour market participation rate of the female component of the population is approximately 30 percent higher in the North. This characteristic of the Italian labour market virtually nullifies the advantage of the South generated by a much lower cost of living. On the basis of the estimated True Cost of Living Index the purchasing power in the Veneto is 1.15, in Lazio it is 1.02 slightly higher than the reference for Italy equal to 1, and 0.72 for Sicily.

According to the authors (Menon, Perali, Ray and Tommasi), this is not the only factor that contributes to the rebalancing of the gap, but it is important to integrate into the estimate also the perception of families of the North-South differences between quantity and quality of public services. The idea is that 1 euro invested in the consumption of a service is actually worth more than 1 euro if, with the same number of service units consumed, higher quality is also obtained. The quality correction reveals a clear advantage for the North (Figure 1.b). The comparison between real individual incomes and quality-adjusted real individual incomes (Figure 1, panel a and b) shows that the quantity and quality of public services in themselves are not sufficient to balance the standard of living in favour of the North. Quality adjusted purchasing power in the North is about 28 percent higher than in the South of Italy only if it is calculated at family level, taking account of the different structure of the labour market between the two regions of Italy.

These very marked differences in the purchasing power of families in Northern and Southern Italy also significantly influence the measurement of poverty. As is reasonable to expect, in nominal terms, that is, when the cost of living is not corrected to take note of the spatial variation of prices between regions, the incidence of poverty in the North (4.8 percent on average) is much lower than in the South (23.9 percent on average) compared to the Italian average of 12.4 percent. In real terms, however, on taking account of the differences in purchasing power, the spatial differences in poverty rates decline sharply and stand at around 10 percent. If we also consider the effect of the perception of the quality of services, the incidence of poverty in the North is around 7.9 percent on average, while in the South it is around 13.6 percent.

These evidences seem to summarize in a comprehensive way the tale of the two Italies. A tale that everyone knows, but nobody wants to hear. Politicians in particular.

Ranjan’s work on spatial prices in Italy with his Italian co-authors follows his research with India based researchers on spatial prices in India and their effect on inequality. In a paper published in 2015 in the Journal of Development Studies, Ranjan and his co-authors find that the nature of inflation in India has been regressive during (1999/2000–2004/2005) andprogressive during (2004/2005–2009/2010) and that the effects of temporal price inflation and spatial priceson inequality are qualitatively different from one another. The policy importance of the Indian results is underlined by the sensitivity of the demand elasticities and inequality estimate to the inclusion/omission of spatial price variation.

Biggeri L., Brunetti A. and Laureti T. (2008), “The interpretation of the divergences between CPIs at territorial level: Evidence from Italy”, Invited paper presented at the Joint UNECE/ILO meeting on Consumer Price Indices, May 8-9, Geneva., Proceedings UNECE, Geneva.