French economist Thomas Piketty is visiting Australia in October as a guest of Monash Business School and the Sydney Opera House.

Piketty has become widely known for his argument that rising income inequality amid western economies will continue throughout the 21st century. Monash Business School's Professor Jakob Madsen assesses his argument. 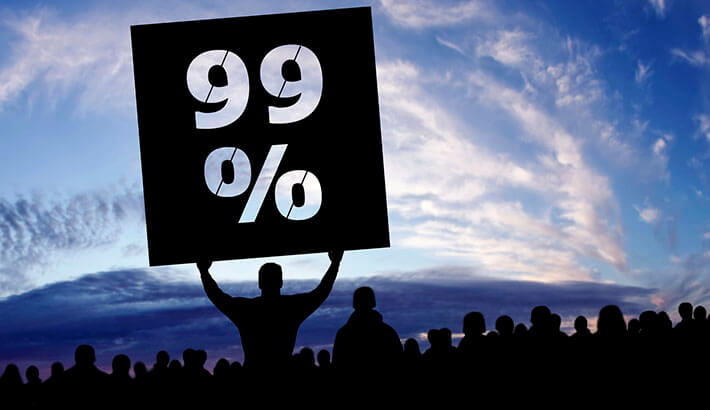 In his best-selling 2014 book Capital in the 21st Century, French economist Thomas Piketty argues that inequality has been increasing in most western economies since the early 1980s and that this increasing trend will continue for the rest of the 21st century.

Analysis makes it clear that the recent increase in the top 1% income share, as a proxy for income inequality, is neither unusual nor does it come close to the inequality that prevailed in the pre-WWI period in the OECD (see Figure 1 below).

But arguing that inequality is significantly lower now than a century ago, does not mean that the current level is socially acceptable, nor that it is economically efficient. In fact, inequality may harm economic growth because it prevents the financially under-privileged group from accessing further education, entrepreneurship and innovation.

The inequality trend in the 20th century

Piketty argues the first significant decline in top 1% income shares occurred immediately after the world wars. He states this was an outcome of nationalisation efforts, increasing taxes, increasing strength of unions, and high inflation that reduced the real value of nominally-denominated assets, such as bonds and cash money.

The impact of the post-war inflations was particularly severe. A large fraction of wealth held by the rich was of the fixed-rate type; unredeemable government bonds issued to finance war efforts. In addition, the inflations were unexpected or, more likely, bond holders failed to understand the financial implications of inflation.

The post-WWII decline in inequality up to circa 1980 and the subsequent increase, was heavily influenced by the strength of the trade union movements. This reached its pinnacle in the late 1970s and has since, judging from membership rates, weakened substantially.

Globalisation has aggravated the inequality trend through immigration of unskilled labour and imports of inexpensive manufactured goods produced by low-skilled workers in developing economies.

The role of globalisation in driving inequality

Globalisation and the increasing demand for skilled (educated) labour have also been influential for the increasing inequality in the OECD since the early 1980s.

Unskilled workers have lost out to their skilled counterparts because technological progress has led to an expansion of jobs requiring more skills than previously. Furthermore, the absolute and relative number of manufacturing jobs, which have typically been of the unskilled type, has shrunk markedly since the 1960s; thus contributing to the pool of unskilled workers without jobs.

Globalisation has aggravated the inequality trend through immigration of unskilled labour and imports of inexpensive manufactured goods produced by low-skilled workers in developing economies. It’s no wonder the low-skilled, who have experienced shrinking job opportunities and wage growth, are turning against this development, witnessed, for example, by the UK’s decision to leave the European Union – Brexit.

The intellectual and business elite should try to understand this rather than trying to justify a development that has clearly benefitted them enormously. Piketty and the role of capital

Piketty’s central argument that inequality will continue to grow in the 21st century is based around what has been called his Third Law: the contentious r>g. That is, the rate of return on capital – ‘r’ - is greater than the rate of economic growth -‘g’.

This is what he termed the “central contradiction of capitalist economics”.

In Piketty’s view, the wealth-income ratio was pulled down during the 1950s and 1960s by high economic growth rates that diluted wealth because it increased the creation of new wealth (income) and contributed to increasing equality.

But Piketty argues that the inequality reduction of the 20th century was a one-off-event only and that we are now reverting towards the inequality that prevailed before WWI.

However, the excess of asset returns over growth did not lead to increasing but decreasing inequality, indicating that some important factors driving inequality are missing from Piketty’s model.

He argues that although the world is seeing reduced income growth rates, the already rich continue to accumulate higher levels of wealth through saving and returns on existing assets. This wealth, going to a smaller group of those who own capital, outstrips that generated by economic growth, which is spread widely across various income groups – exacerbating income inequality.

A good example of this is the exorbitant increases in house prices in OECD countries since 1995, which has evidently increased the wealth of the rich able to afford the most expensive housing and who have experienced the strongest housing price expansions.

Since the value of a dwelling is often multiple times the annual income of the owners, the high returns to housing have amplified income and, particularly, wealth inequality from which income is often derived.

Now, will the recent inequality path continue? To understand the present situation and the future it is vital to look into the past.

My own analysis backs the validity of Piketty’s essential argument, but with some caveats.

Growth, on the other hand, has increased because of the increasing population combined with moderate productivity advances in the 19th century. Although population growth has fallen markedly over the past century in most countries, high productivity growth rates kept growth rates – ‘g’ - high. The narrowing of the (r-g)-gap in the 20th century has coincided with reduced income and wealth inequalities (not shown).

However, the excess of asset returns over growth did not lead to increasing but decreasing inequality, indicating that some important factors driving inequality are missing from Piketty’s model – something I have written in more detail and here.

However, what is important here is that Piketty’s Third Law has some validity in the sense that a high (r-g)-gap is associated with increasing inequality.

Assuming that real asset returns remain fairly constant at around 4.5%, Piketty predicts that the (r-g) gap will continue to widen for the rest of this century because of reduced population and per capita income growth. Reduced population growth in the West is probably undisputed.

Like Piketty I also strongly believe that productivity growth and, therefore growth in per capita income, will decline significantly relative to the growth rates experienced during the 20th century for several reasons.

Reduced population growth in the West is probably undisputed. Like Piketty I also strongly believe that productivity growth and, therefore growth in per capita income, will decline significantly relative to the growth rates experienced during the 20th century for several reasons.

The main reason is that the extraordinarily high productivity advances in the West up to the onset of the Global Financial Crises cannot be repeated, not least of all because they were heavily influenced by the fertility transition, the infant mortality transition (that caused a marked increase in IQ), the education revolution that has brought the educational attainment up to levels that are not likely to advance much further, better nutrition (that may have recently gone in reverse), and the decreasing value-added of new innovations (the most important and productive innovations have already been made). So g will almost certainly decline in the West.

It is much more difficult to predict asset returns for the rest of this century. Embarrassingly for the economics and, particularly, the finance profession, we know extremely little about the factors that drive asset returns. Figure 2 shows clearly that asset returns fluctuate excessively and unpredictably.

Furthermore, central banks may keep the interest rates artificially low for long periods because they believe that the low growth rates are driven by deficient demand and not that we are entering a low growth regime. Assuming that the after-tax returns on the average assets will be close to or slightly below the historical average of 5%, we are likely to experience unaltered or increasing inequality for the rest of this century.