As part of the Obesity Prevention in Communities (OPIC), AQoL-6D was adapted for use by adolescents in four countries and recalibrated according to their TTO scores. Details of the project are given in Moodie et al (2009).

Figure 1 below summarises the process of adaptation. In each of the four countries (Australia, New Zealand, Fiji, Tonga) focus groups were conducted with adolescents to determine semantic and cultural equivalents to the language used in AQoL-6D (Step 1). The recalibration of the scoring formula was based upon the stage 2 methodology used in AQoL-6D. Thirty scenarios were constructed from the AQoL-6D descriptive system (step 2) and administered to students in their classrooms (Steps 3, 4). Resulting TTO scores were used in an econometric analysis (Steps 5, 6). TTO results were statistically ‘explained’ to determine the final scoring formula.

Use and Scoring of the AQoL-6D Adolescent Instrument

The Australian adolescent scores were related to the general AQoL-6D score with the following equation where 1.19 is the country correction for Australia:

AQoL-6D is the utility score obtained from the scoring formula for the general population on the AQoL website.

The relationship is illustrated in Table 1 below. Figure 1 plots the adjusted (adolescent) score against the adult population score using the 1087 observations obtained from the general population in different AQoL projects. 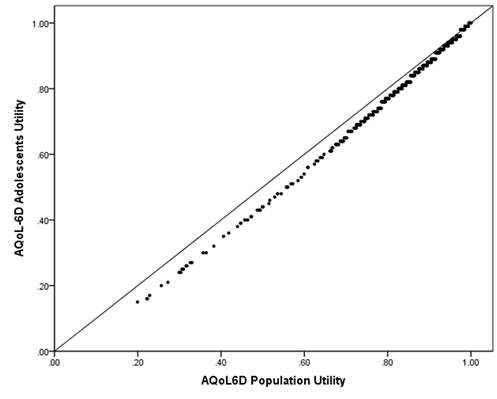