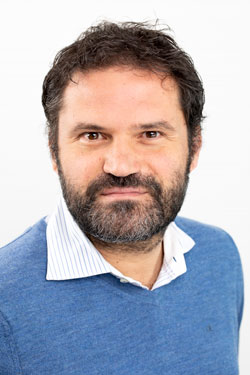 Imagine the boot of Italy on the map. In the “instep” between the toe and the heel lies Basilicata, a small mountainous region between two seas. Far from the mainstream touristy regions of Italy. This is where Associate Professor Giovanni Caggiano originates from.

“My region is not very well known but it had some fame recently when the New York Times ranked it third on a list of places people should go in 2018.” Unlikely as it may seem, he is not the only member of department from the region. Lecturer Claudio Labanca is also from Basilicata.

So does the region breed a lot of Economists?

“I don’t have data but if I think of the number of economists in comparison to the total population then I would say yes. Probably when you come from a region that is quite poor, when you go to university your parents push you towards a field where you can get a job. With Economics you can at least work in banking”, says Giovanni Caggiano.

He didn’t end up in banking but is specialised in applied macroeconomics “somewhere between empirical macroeconomics and time series econometrics”. He appreciates that the department is growing, even within his own field.

Joining Monash and moving to the other side of the world was not a very difficult step for him or his wife. He’s been coming to Melbourne for several years to see a friend and co-author who works at the University of Melbourne.

“It was a big move in geographical distance but not in terms of psychological distance. It’s familiar both for me and my wife. It was not as easy for her because she had to leave a job in Italy and didn’t have one here but we both love Melbourne. It’s very multicultural which we like and it has some exotic aspects of Australia. But there’s also a lot of what I used to have. It’s a walkable city and we don’t need a car. There are also cinemas, theatres, music concerts, libraries and book shops. And food is fantastic!”

Not a bad verdict coming from an Italian. In his free time he likes to go to the movies and music concerts and is an avid reader of both fiction and non-fiction although he claims he is getting much slower with age.

“I spent months reading “Infinite Jest” by David Foster Wallace which has been a revelation. Philip Roth I love. I was a Philip Roth fan for many years and read everything he wrote. I was sad when he passed away” he says.

Lately he has started consuming non-fiction through podcasts. “I get up early in the morning and walk to work listening to Malcolm Gladwell’s “Revisionist History”, he’s just amazing.”

But neither banking nor macroeconomics was something Giovanni Caggiano wasted much time on growing up. For many years his dream was to become a professional soccer player.

“I wasn’t good enough. I played until I was eighteen but then I just didn’t have the exceptional skills needed. From my earliest memories I’ve supported the same team, AC Milan, so I guess that stays with you for life.”

One thing he misses here is watching the matches on the weekend, the time difference makes it too hard. Every Monday he wakes up and looks at the results.

“If AC Milan did badly over the weekend then the week won’t start in a good mood”, he says.

But on his mind more than football these days is his new born son Nicolò.

“If my colleagues who have more experience have any tips on how to get a good sleep at night then they should get in touch and let me know how to cope.”