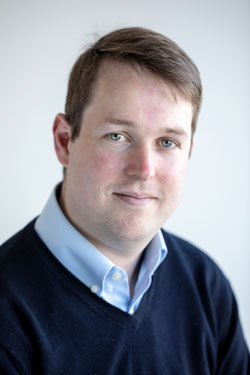 Only a local Melburnian will know what it means to be the only St Kilda supporter in a school near Essendon where every class mate barracks for the AFL team with the same name.

“It was tough going to school in Essendon, they were an incredibly strong team at the time, and all the Essendon kids would remind me how bad the Saints were”, says Gordon Leslie. But the experience didn’t deter him from wanting to become what any Melbourne kid would want to be:

“A premiership winning centre half forward for St Kilda!”

This, in Melbourne’s north-west is where Gordon Leslie grew up. And this is where he has chosen to return – still a St Kilda fan.  His parents live in the same house in Strathmore and he is not far away in Footscray.

His primary school teacher was also a part time zoo keeper at Melbourne zoo so for a few years this was another career dream of Gordon’s. Not until he realised he was good at maths and got to University did he realise that his future might be in Economics.

After his undergraduate degree at The University of Melbourne, and a stint at the Commonwealth Treasury, he applied to do a PhD in the US. He ended up doing a PhD in Industrial Organisation at Stanford University with a focus on empirical work that evaluates policy changes and market design issues in electricity markets.

“A lot of very good Australian academics go and get training overseas to return here so I thought that’s what I should do too.”

After five years in the US he and his wife have recently returned to Melbourne. It was always the plan to come back to Australia at some point, it just wasn’t clear when.  But when the offers started coming in, the one from Monash was very good.

“We thought this is ultimately where we might want to end up so let’s take it whilst it’s there.”

And it seems to be very good timing for Australia to have someone specialised in energy markets return?

“Yes, it’s timely. Energy issues in Australia are really taking off and there seems to be a need for good economic analysis. And the department was very well placed to get me productive”, says Gordon.

He is already collaborating with colleagues in Engineering and IT at the Monash Energy Materials and Systems Institute (MEMSI) which conducts research to create new products in the energy sector. Along with Monash’s Net-Zero Initiative, they have committed to start up an on-campus, transactive micro-grid, a miniature electricity market. There are many technical challenges but also some economic and policy challenges which Gordon would like to focus on -- like whether it is feasible to administer and organise a market that has building managers on campus responding to higher or lower wholesale costs or prices during the day.

“It’s very exciting times at the energy space at Monash.”

When he is not working Gordon is a keen reader and currently on a big Terry Pratchett bender.

“I’m about half way through the series.” No small feat, there are 41 novels in the series. He also enjoys catching a movie or two at the cinema.

“There’s the magnificent little Sun theatre at Yarraville which has a terrific atmosphere where we like to go.”

He has recently adopted a Greyhound which he takes on morning walks and on adventures to the beach with his wife.  Most weekends they spend with the in-laws in Mount Macedon. The dog is named Cleaver after the brilliant and self-destructive barrister Cleaver Greene in the Australian TV-series Rake.

“But my dog is a far better person than Cleaver Greene is”, he says.