The rectangular teaching space at the Peninsula campus is brand new with irregularly shaped tables for the students, white boards and screens on the walls throughout the room.

It is hard to believe it can seat up to 60 students and because of the numerous screens everyone can see the slides or videos projected across them all. The camera mode can also be switched on to show the white boards across the screens if the teaching assistant needs to write something to explain further.

The tables themselves are covered in a white board surface so the students can write on them. 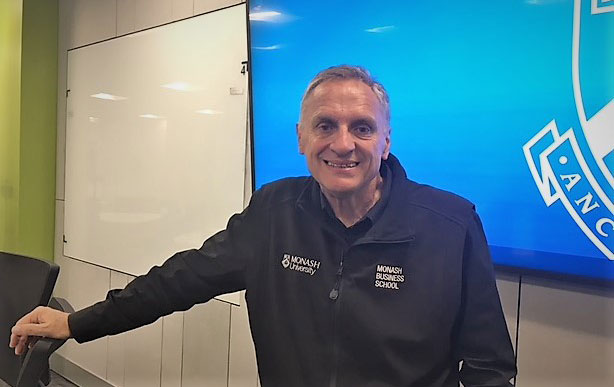 “When a tutorial is going really well, the table top is full of writing and the students will just continue writing on the white board on the wall and they are really feeding off each other,” explains Associate Professor Lionel Frost.

He thinks the new space has greatly improved the teaching at the Peninsula campus. It means students can discuss a topic in a group rather than with just their neighbours when they are seated in rows and he and the TA can circulate freely in the room. Students are expected to answer questions and explain to fellow students at the white boards.

“The way this is set up is to break down hierarchy. Sometimes I will sit down at one of the tables and go through a concept for half an hour with the students if that’s what they need,” he says.

But it’s not just the new facilities that are behind the success of Lionel Frost’s teaching. He teaches from his own text book that is updated every three years to stay relevant to students. There is over a 90 percent pass rate in his classes and he believes it is largely due to the continuous assessment method he applies throughout his courses of first year Micro and Macro.

“I’ve been working with continuous internal assessment for years. I just find that it works so much better. To start with students turn up to class because there’s a test. But now they come to the tutorials anyway because they know that’s when they learn,” he says.

Throughout a semester the students are tested about six times in class and the grades of the assessments count for 40 percent of the final grade. There is a very strong correlation between how well they do in the continued assessment and the final exam. A traditional final exam makes up for the other 60 percent. Lionel is not a believer in mid-semester exams.

“I just feel students aren’t doing very well in them, that they haven’t started working yet, it’s a bit of a wakeup call. What we try encourage here is regular work on a weekly basis.”

Lionel has also turned to a more tutorial based learning model. He will deliver one lecture a week which lasts about 50 minutes and a two-hour tutorial where he runs through the key concepts again but mainly focuses on case studies and real world examples in smaller groups. The Peninsula campus has a lot of advantages. It is small and friendly and the staff are often on hand to answer questions. Still they have to work hard to retain students.

“This is often their third choice and a lot of them come here to do a first year and then they want to move on to Caulfield. But we take the teaching very seriously.  The foundations are so important. If we don’t teach them well in first year and get them engaged and learning they are not going to choose Economics as their major, that’s why we have to put in a lot of effort.”

80 percent of students are Internationals, the majority from China.

“They do very well in this smaller setting and the continuous assessment teaches them what we expect and shows them that it’s just putting in the hours and doing the work there’s every support for you here.”

How do you think the Department can become better at teaching?

“I think a lot of great work is already being done by passionate people like Simon Angus and I don’t think I’ve met anyone who’s said they don’t enjoy the teaching. But it would be great if we could have a Teaching retreat in the same way as we had for research. I really enjoyed the research retreat and I think we could do something similar with teaching, just a few hours to learn from each other.”

Will you be making any changes to your teaching next year?

“I am always thinking about what I can do better, keeping my textbook updated and finding new examples. I will definitely keep the structure of one lecture and two-hour tutorial per week. I had an experiment this year recording short videos and posting them before the lectures about the key concepts for that lecture. But I’m not sure students were really watching them so I don’t know if it’s worth it. I’ll try something different next year.”