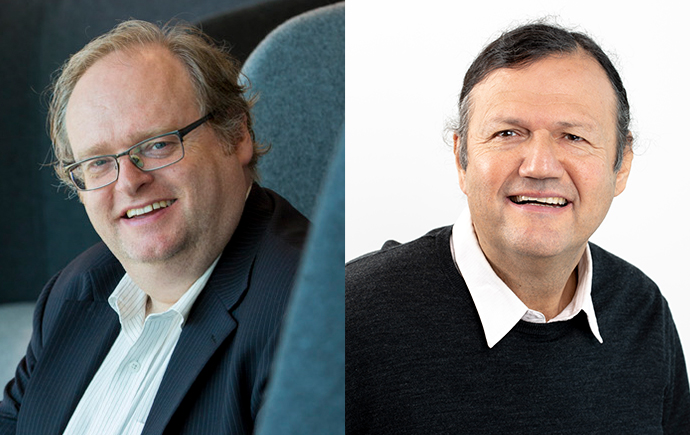 Monash Business School’s Professor Gary Magee, Deputy Dean (Research), and Professor Yves Zenou, Richard Snape Chair in Business and Economics, have been elected as Fellows of the prestigious Academy of the Social Sciences in Australia (ASSA).

Professors Zenou and Magee are among 37 of Australia’s leading economists, lawyers, psychologists and philosophers elected as Fellows of the ASSA, one of Australia's four learned academies.

Two other Monash University researchers were also named as ASSA Fellows: Emeritus Professor Peter Gronn, from the Faculty of Education; and Professor Sarah Pink, Director of Emerging Technologies Research Lab, in the Faculty of Information Technology and Faculty of Art, Design and Architecture.

Established in 1971, the ASSA advances social policy and thinking by promoting research and its application.

This election recognises the contribution Professor Magee and Professor Zenou have made to the advancement of social science knowledge and the impact of their research.

“I am honoured to be elected to be a Fellow of such a prestigious organisation,” says Professor Magee.

“I look forward to contributing to the important work of the Academy in continuing to promote the advancement of the social sciences.”

He has been an Australian Bicentennial Fellow at the Menzies Research Centre, King’s College London; a visiting fellow at Oxford University; and is a Fellow of the Royal Historical Society (UK).

He has published four major research titles, two with one of the leading academic publishers, Cambridge University Press. His most recent book, Quantifying Resistance, uses a path-breaking new database of internal resistance to the Nazi state to analyse empirically, for the first time, resistance to an authoritarian regime.

Professor Zenou is a world expert on social interactions and network theory, urban economics, segregation and discrimination of ethnic minorities, criminality and education.

“It is an honour to be elected a Fellow of the Academy of the Social Sciences in Australia,” says Professor Zenou.

Since 2016 he has been a Fellow of the Econometric Society, and since 2012, a Fellow of the Regional Science Association International and the Academy of Europe (Academia Europaea).

His book Urban Labor Economics was published by Cambridge University Press in 2009 and translated into Chinese in 2016.