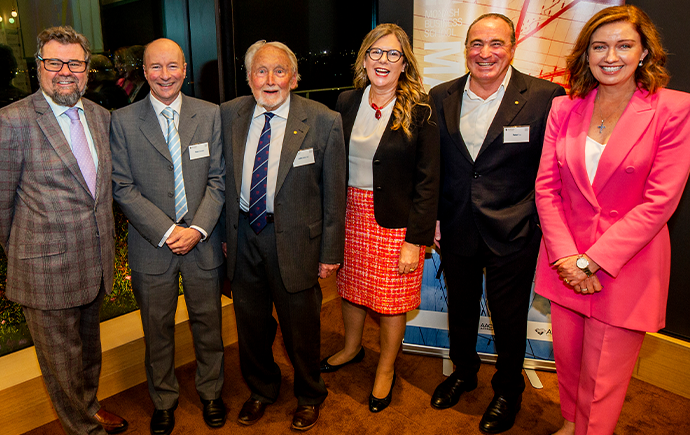 The department is the largest provider of tertiary-level marketing education in Australia.

Welcoming guests, Brigette McGuire from the Department's Industry Advisory Board said since the department opened in 1971, more than 22,000 Monash Marketing alumni had graduated and made their mark in Australia and internationally.

"Throughout our 50 years a diverse range of marketing qualifications have been developed, demonstrating the ability to lead and adapt with change," Ms McGuire said.

"As Monash expanded its presence here and overseas, so did Marketing, moving from its home ground here at Caulfield to Clayton, Berwick, Gippsland and then across the seas to South Africa, Malaysia and China."

In his official welcome, Head of Monash Marketing, Professor Peter Danaher said the department was one of the largest of its kind in the world, with over 40 academic staff.

"We put a lot of effort, especially with students who can't get back to Australia, into retaining them, keeping them engaged and wanting to stay with Monash."

"University taught me that the lessons don't stop when the final assignment is due, classes finish and exams end," Ms Fowler said.

"A good education, after all, is that unique process designed to set people up for lifelong learning. That's exactly what I received from Monash."

In her years as a member of boards including the Australian Ballet, Ms Fowler said she drew frequently on her Monash Marketing lessons. "Especially one - Understand Your Customer," she said.

"In an era when consumers increasingly control their spending on a device that slips into their pocket, understanding their wants and needs has never been more important," she said.

"At high school I was not a great student...I failed VCE twice," Mr Fox said.

Towards the end of his first two years at Linfox, a mentor told Mr Fox he would not promote him without a degree.

During his subsequent Bachelor of Business (Marketing) studies, Mr Fox directly learnt from Prof Chandler "the lessons of the will to succeed."

"The subject matter was commonsense and easily understood and relevant," he said. "The teachers all had industry experience and were very practically orientated."

"They were all world-class educators and legends today in my mind," he said.

"This Institution has had an incredible and indelible impact on the success of my career."

"I've learnt the concept of mission-critical, to stay the course until a task is completed. To deal with adversity, difficulties, to persevere, to stick it out."

"The future has never been brighter for marketing and this department," Prof Wilkie said.

"People hear AI and they think of artificial intelligence, but we should really think of it as augmented intelligence. They are really ways to augment our human abilities," he said.

"Empathy, judgment, the ability to work in teams, innovative creativity, become more not less valuable. The skills taught by our Marketing Department are becoming cornerstone skills in the future workforce."