Applications and tools for climate and energy modelling 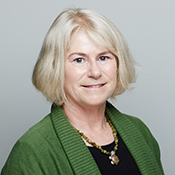 As a professor of statistics, Dianne Cook’s work is primarily in the field of exploratory data analysis using visual methods with a commitment to creating open source software.

Among Prof Cook’s contributions to climate and energy modelling, she has developed a visual method that allows plotting of both spatial and temporal data using linear transformations, called a glyph map. This was used to study El Nino phenomena in the Southern Ocean and other climate change trends elsewhere in the Southern Hemisphere, such as the Andes region. The team won a data analysis award for this work, and helped Prof Cook awaken to the potential environmental disasters at high altitudes - particularly melting glaciers.

Prof Cook has recently also extended the glyph map method into a calendar layout to display temporal data, which is useful for studying household energy consumption. Using this to analyse her own household energy use, she managed to halve her own consumption over the course of a year.

Her commitment to open source software leads her to make data analysis tools that others can use to analyse spatiotemporal patterns such as climate change. Numerous R packages (a standardised package of code, data and documentation) that have resulted from her research, include a current project with one of her PhD candidates on a new spatiotemporal data object for R that will make it easier to collate data such as climate records, and to reshape them in different ways for different analysis tasks.

Prof Cook is also overseeing work on smart meter data, and development of another R package is underway enabling energy usage to be broken into temporal granularities, to explore cyclical patterns, and help to study energy usage across large collections of households.

She is also leading ground-breaking work compiling open data resources, in collaboration with AT&T, to evaluate and predict Victorian bushfire sources and hotspots.  Data sources include fire origins, fire stations and recreation sites from the Victoria’s Department of Environment, Land, Water and Planning, weather from the Bureau of Meteorology and CSIRO, fuel layer from the Australian Bureau of Agricultural and Resource Economics and road maps from Open Street Map. This compilation of data, and sophisticated modelling, is allowing the development of interactive fire risk maps for Victoria. That work has won an Australian Centre of Excellence for Mathematics and Statistics grant.

Prof Cook is currently on the Bureau of Meteorology’s Data Integrity Advisory and Assurance Committee.