Discovery shines light on the cause of some allergic responses 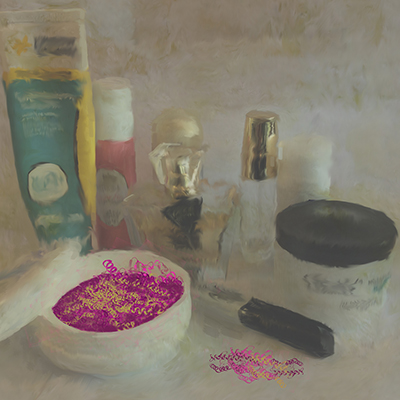 "Allergens and cosmetics”. Artwork of a moisturiser jar containing a depiction of the immune molecule, CD1a, binding to the allergic compound. By artist-in-residence Dr Erica Tandori, from the Rossjohn lab at the Monash BDI.

A team of international researchers from Monash University, Columbia University and Harvard Medical School has discovered how some compounds contained in cosmetic and perfume products can activate human T cells, the sentinels of our immune system.

It’s long been known that certain chemicals cause allergic contact dermatitis (ACD), but our understanding of why this is happening is still very limited.

Researchers found more than a dozen small compounds that were able to associate with the CD1a protein leading to an immune response in human T cell culture.

“Normally, many CD1a molecules are filled with natural blockers in our bodies that would prevent an exaggerated immune response, and those small compounds basically remove those natural blockers” said Dr Marcin Wegrecki, who together with Dr Jerome Le Nours, was part of the Monash University team involved in the study.

Part of the research focused on small chemicals found in many essential oils and botanical extracts such as the Balsam of Peru, an oily tree resin found in many cosmetic products, toothpastes and fragrances.

“Balsam of Peru was also used in natural products because it comes from a tree - it’s not chemically synthesised - so it was very popular. But unfortunately a significant number of people - up to five per cent of the population - is allergic to it because it contains all those small compounds,” Dr Wegrecki said.

Using a high energy X-ray beam at the Australian Synchrotron at Monash University, the researchers were able to describe the way CD1a and farnesol, another common additive in cosmetics and skin creams, interact at a molecular level.

Dr Wegrecki, based at the Monash Biomedicine Discovery Institute, said the results, published in Science Immunology, gave more clarity around what was happening.

“Now we know how some of the compounds found in skin care products and cosmetics can directly interact with human proteins,” he said.

Despite the known allergy, Balsam of Peru is still used in some products, including toothpaste, sunscreen, face creams and cosmetics.

Further research into the clinical significance of these molecular findings could now help scientists understand how those small chemicals induce ACD and potentially design strategies to revert their allergenic effect.