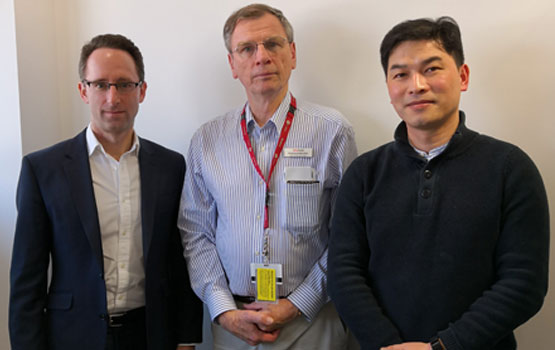 To patients with end-stage heart disease waiting for a transplant, the ventricular assist device (VAD) – a mechanical pump that helps the heart move blood – can be life-saving. But infections associated with VADs can make their use risky.

Now, Monash Biomedicine Discovery Institute (BDI) researchers and collaborators from The Alfred Hospital, Melbourne and St Vincent’s Hospital, Sydney, have discovered how such infections spread and propose a way to prevent this. Their findings were published recently in the top transplant journal, Journal of Heart and Lung Transplantation.

The BDI’s Dr Yue Qu, a microbiologist, is first author on the paper, with Professor Anton Peleg, who heads the Department of Infectious Diseases at the Alfred Hospital and holds a joint appointment with the BDI and Monash Central Clinical School, senior author. Professor David McGiffin, Director of Cardiothoracic Surgery & Transplantation at The Alfred, was instrumental in the clinical study.

Professor Peleg, world-renowned infectious diseases and microbiology clinician-researcher, said, “Driveline infections remain the Achilles heel of long-term survival and quality of life for patients with ventricular assist devices. A better understanding of how they form and progress is desperately required to inform improved preventative and therapeutic approaches.”

Said Professor McGiffin, “Driveline infections are a very important cause of morbidity and even mortality after VAD implantation, not just because of the local problems associated with the infection, but these infections also increase the chances of stroke, probably because the inflammatory milieu in the patient is increased and predisposes them to ischaemic and haemorrhagic strokes which are usually devastating.”

The researchers studied bacteria/fungi that caused infections along the VAD’s ‘driveline’, the cable connecting the internal pump to the batteries and computer controlling the device carried outside the body. These infections can become extremely resistant to both the body’s immune system and antimicrobial treatment.

Dr Qu said the study marked the first time that clinical biofilm causing infections had been observed on drivelines and characterised. The researchers found that not only were the bacteria attaching tightly to the driveline material as biofilms, but they were also migrating up the driveline towards the pump in the heart. The team have discovered for the first time microgaps in the human tissue tunnel that the driveline sits within, and proposed that these microgaps facilitate migration of organisms toward the heart.

“The infections grow at gaps on the interface of the driveline and human tissue, spreading from the skin exit site to deep tissue inside the body,” Dr Qu said. “The drivelines we looked at have velour around them into which tissue integrates but it appears that the tissue integration is insufficient – we found a lot of microgaps in them.”

Drivelines can typically stay inside patients – including those with end-stage heart failure who are ineligible for transplant – from six months to several years.

The researchers analysed nine infected and 13 uninfected drivelines obtained from patients with a VAD undergoing heart transplantation at the Alfred Hospital and St Vincent’s Hospital in Sydney between 2016 and 2018. Customised micro–computed tomography (CT) at CSIRO  and Scanning Electron Microscopy (SEM) at BDI were used to assess host tissue integration.

Professor Peleg said that these novel and clinically important findings provided a crucial step towards developing an intervention to prevent VAD infections. “The results have already been reviewed by our global medical device industry partners to see how our findings may influence future driveline development and implantation methods,” he said.

Professor McGiffin stressed that the only way the problem of driveline infection could be tackled was by a multidisciplinary team such as the one conducting the study as it requires the input of so many disciplines, including surgery, microbiology, infectious disease, engineering and materials science.

The researchers will now work on a new strategy to counter driveline infection, developing a hydrogel to seal microgaps and which also contains an anti-microbial agent to kill infections.

The collaboration has recently been awarded an External Research Program grant by Medtronic USA, the world’s largest medical device company, to further research into driveline infection.

This study, which has attracted interest from several potential major industry partners, was supported by the Australian National Health and Medical Research Council (NHMRC) and The Alfred Foundation.