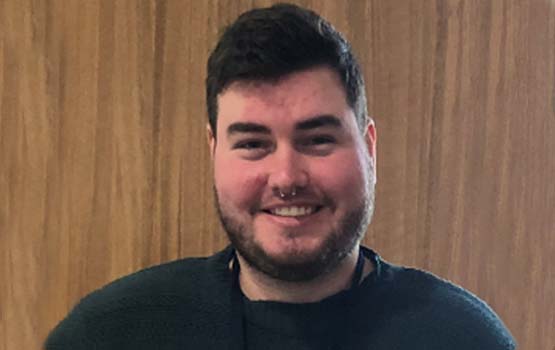 A Monash Biomedicine Discovery Institute PhD student has won a grant to conduct novel research using emus that aims to solve the question of what determines whether a bird is hatched male or female. Understanding avian sex determination could have important implications for Australia’s poultry industry.

Martin Estermann, who works in supervisor Professor Craig Smith’s laboratory, has been awarded a Society for Developmental Biology (SDB) Emerging Research Organisms grant to the value of US$5000 to study sex determination and gonadal differentiation in emus.

In his project, scientists will perform transcriptomic analysis in emu gonads to analyse the genes that control emu gonadal differentiation into testis or ovary (sex determination).  The ultimate aim is to identify the key master gene, located in the W or Z chromosome, that regulates sex determination in birds. Previous work in Professor Smith’s lab indicates that the Z chromosome lined gene, DMRT1, is the master sex gene in birds. The emu work will support or refute the idea that DMRT1 is the universal avian sex determinant, because emus are part of an ancient clade of flightless birds, the ratites.

“We know a lot of things about how the sex of chickens is potentially developed; a lot of research in our lab has been done into this model,” he said. “Going outside chickens is a really interesting way to do this research.”

Male birds in general have a ZZ sex chromosome constitution and females are ZW. In emus, the Z and W chromosomes share most of their genes but there is a small differentiated segment that does not cross over during female meiosis – the early cell division that produces reproductive cells – and which is presumed to carry the sex determinant, he said.

“We’re going to use transcriptomics to find the genes that are expressed in males and females at the specific time when the gonads ‘choose’ to become an ovary or testes,” he said. “Besides that, we also want to know when and where genes from the Z chromosome or the W chromosome are being expressed.”

Mr Estermann hopes the research will help reveal the answer to a question that has puzzled scientists for some time. The research could make a substantial impact on the field of sex determination, gonadal development and developmental biology in general, he said.

The SBD award follows a recent publication in Cell Reports on gonadal sex differentiation in the chicken embryo on which Mr Estermann was first author and Professor Smith the last author.

“We showed for the first time that the gonads in the chicken have different cellular origins than what is known in mammals,” Professor Smith said.

“This was an interesting surprise,” he added.

This offered new opportunities for scientists to research the developmental origins of gonads in other species such as reptiles, which are closely related to birds in terms of evolution, or fish, Mr Estermann said.

The paper was the latest in the series of ground-breaking developmental biology work by Professor Smith. In 2017 his lab published their findings in Nature Communications that helped solve the mystery of how emus became flightless, identifying a gene involved in the development and evolution of bird wings. Emus, it seems, may hold many surprises.