In a South African cave, another piece in the puzzle of human evolution 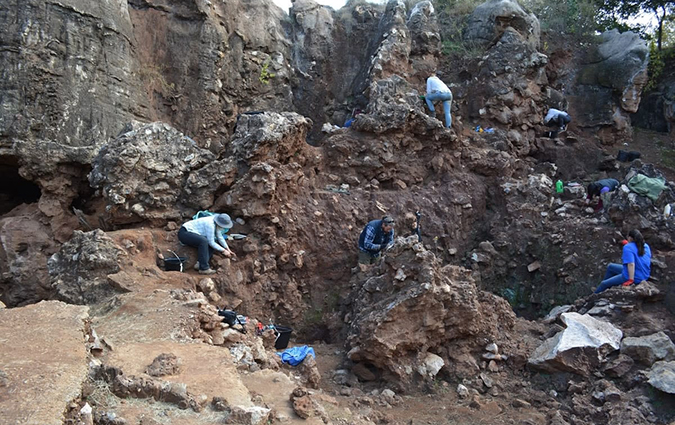 In the Cradle of Humankind: The Drimolen cave system in South Africa.

“Caves are fascinating places to work in,” Dr Justin Adams says. “In South African cave palaeontology, we don’t struggle with finding the fossils. We know where they are – they’re in the caves’ deposits, because caves attract animals.”

Dr Adams is part of an international team – led by La Trobe University in Melbourne – that discovered and analysed fragments from a human-like child’s skull at Drimolen. Dr Adams is a senior lecturer in anatomy and developmental biology in the Monash Biomedicine Discovery Institute, and a field palaeontologist.

The child was aged three; the fragments are two million years old. In doing so, the team has played an integral part in solving part of the puzzle of our human origins, and have had their extraordinary findings published in the journal Science.

The three-year-old was in the group of our human ancestors known as Homo erectus. Remains of Homo erectus fossils are rare in southern Africa; most discoveries of the species have come from northern and eastern Africa, Java, China, and the Republic of Georgia.

“Our discovery is planting a flag, and saying there was Homo erectus here several hundred thousand years before what was known. So whatever biological events had to take place to get us to a Homo-like condition had already happened before two million years ago," Dr Adams said.

“The new kid on the block, Homo erectus, is somehow able to live on the landscape, too, and the primary adaptation is having a big brain and children with big brains.

“This new kid on the block is starting down an evolutionary pathway, but at the same time living on a marginal environment that represented a challenge for other hominin groups like Australopithecus, who we previously demonstrated had a unique survival strategy of returning to breastfeeding at times of limited nutritional options,” Dr Adams said.

Among the rich record of extinct animals from Drimolen were also fossils of two species of sabre-tooth cats that had never before been found in the same fossil deposits.

Read the original article in full, published on Lens.

This research also received significant media coverage, read some of it here.