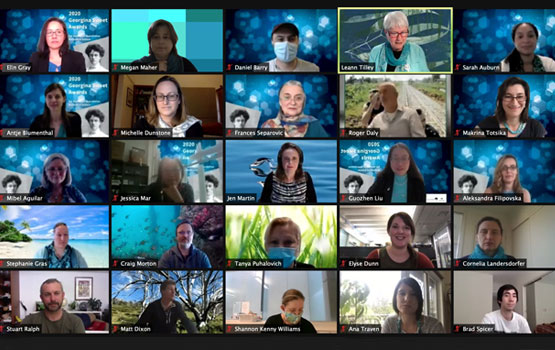 A/Prof Michelle Dunstone (pictured second from left, second row) is one of six recipients of the Georgina Sweet Award for Women in Quantitative Biomedical Science for 2020.

The award will boost Associate Professor Dunstone’s work into a new family of insecticidal proteins she has identified which she anticipates could be used to specifically target crop-eating insects. Hole punching proteins work – whether in plants or animals – by recognising a harmful target cell, then changing shape and grouping together to form a ring. This ring literally punches a hole in the cell. This kills the cell and is basically a molecular hole-puncher.

Associate Professor Dunstone said the award would help her quest to broaden the range of molecules being studied in the lab and to connect with key entomologists in Australia to strengthen collaborations.

She said it was a valuable recognition of her work. “Sometimes it’s not just enough to publish or even achieve outcomes – it’s the recognition from the science community,” Associate Professor Dunstone said. “I was over the moon to receive the Georgina Sweet award. When I look at the people who’ve come before me it’s very inspirational – I’m very humbled to be in their company,” she said.

Associate Professor Dunstone was one of six women who won the coveted award this year, which has a prize of $25,000. A virtual online ceremony will be held on 12 October to honour them.

“I think this award is really not my achievement but about my team’s achievement and their support of me especially Bradley Spicer, Charles Bayly-Jones and Sue Ekkel as well as new team members. Thanks to the team at the Ramaciotti Centre for Cryo-Electron Microscopy as well as collaborators, Ruby Law and James Whisstock, and to Head of Department Roger Daly.”

The Georgina Sweet Awards were created by Professor Leann Tilley as part of her Australian Research Council Laureate Fellowship program to promote and support female scientists who demonstrate excellence in the area of Quantitative Biomedical Science. Dr Sweet, who became Australia's first Doctor of Science in 1904, was an academic in zoology and parasitology at the University of Melbourne. The Georgina Sweet Australian Laureate Fellowship was created by the Australian Research Council in 2010 to recognise her contribution to science.

Associate Professor Dunstone, an ARC Future Fellow, has won a number of other awards, the latest of which was the Australian Society for Biochemistry and Molecular Biology’s Eppendorf Edman Award in 2016. She has been passionate about seeing what pore forming proteins look like since her PhD in 2002.