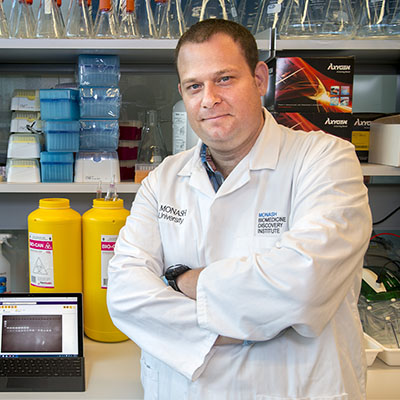 A Monash Biomedicine Discovery Institute (BDI) scientist has been awarded a prestigious Viertel Senior Medical Research Fellowship (SMRF) of $1.25 million over five years to solve a fundamental question about how genes operate.

Associate Professor Chen Davidovich, who is also a Group Leader at EMBL Australia, was granted the Fellowship – one of Australia’s largest philanthropic medical research grants – to further his investigations into repressed genes.

Every cell in the body has about two metres of DNA that is ‘packed’ into a tiny space. Different cells express different genes in the healthy individual, and turn off and tightly ‘pack’ the other genes. During normal development, thousands of genes are switched off.

“I’m working on the system that marks the genes that should be packed and should not be accessible to the cell. When that system is broken, or works either too efficiently or not efficiently enough, you start to see the development of disease such as cancer, congenital disorders and auto-immune disease,” Associate Professor Davidovich said.

Associate Professor Davidovich’s project aims to understand how the process occurs at the molecular level; how the molecules involved interact with each other and how they work together to mark the genes to be packed and repressed.

“The ultimate goal would be to develop specific strategies to target them in particular contexts of disease,” he said.

“The Fellowship’s really important to this work. It gives me five years – a huge time – to really work and develop a project. This is discovery-based research so you actually don’t know what you’re facing and for that reason a substantial amount of time is needed in order to develop the project and answer the fundamental questions.”

Associate Professor Davidovich’s lab is ideally placed to take on the challenge, having already made significant contributions to the field, including showing how the system is regulated by particular factors.

Three Viertel Senior Medical Research Fellows were awarded this year by the Viertel Foundation – one of Australia’s largest charitable foundations – with a further four medical researchers receiving one-year grants to continue their work.

“If there has ever been a time when the importance of medical research has been fully appreciated, that time is now during this year as we all silently cheer on the medical research teams around the world who are working right now on therapies and treatments for COVID-19,” said Jodi Kennedy, General Manager of Charitable Trusts and Philanthropy at Equity Trustees, which manages the Viertel Foundation in partnership with co-trustees Justice Debra Mullins AO (Chair), Rex Freudenberg and Paul de Silva.

“There are relatively few opportunities like this in Australia – offering stability for a research endeavour for five years. Funding discovery research is vital if we want to ensure a vibrant future for medical research, and to help solve some of the world’s biggest medical challenges. I thank the Viertel Foundation for their continued support in recognising the importance of progressing these world-class projects,” Professor Carroll said.

This article is based on a media release originally published by Equity Trustees. Read the full media release.

About the Sylvia and Charles Viertel Charitable Foundation

The Foundation, which distributes around $7.5 million annually, has awarded a total of 55 Senior Medical Research Fellowships and 139 Clinical Investigator awards since its establishment. Read more about the Sylvia and Charles Viertel Charitable Foundation.