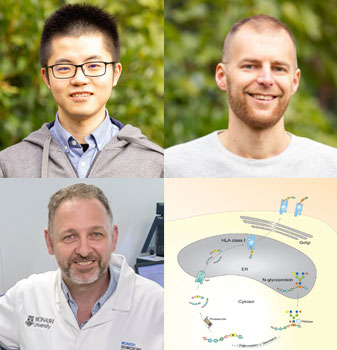 A study by a Monash Biomedicine Discovery Institute (BDI) PhD candidate showing that the immune system is able to sense protein glycosylation – the process by which sugars are chemically attached to proteins – is attracting much interest in the field of immunology.

The findings of the study, on which student Shutao Mei was the first author, point to potential new ways to aid in the design of novel T cell therapeutic targets derived from glycoprotein antigens. Mr Mei is a jointly supervised student in senior co-authors Dr Nathan Croft and Professor Anthony Purcell’s laboratories.

The study formed the cover story in the July edition of journal Molecular & Cellular Proteomics and attracted a commentary in the American Society for Biochemistry and Molecular Biology’s magazine ASBMB Today.

“The paper making the front cover of Molecular & Cellular Proteomics is a great achievement for Shutao,” Dr Croft said. It has been one of the top 20 most viewed papers on the journal website in the last few months.

The immune system’s T cells sense peptides presented on the surface of cells to find and target infection but whereas scientists have traditionally studied unmodified peptides, the BDI researchers investigated peptides that had been modified by cellular processes. Post-translation modifications (PTM) have been implicated in a number of diseases including cancer.

The researchers found high levels of deamidation, a type of modification that occurs when one type of amino acid, asparagine, is converted into another, aspartic acid.

“When we looked at the properties of peptides that had these modifications we noticed patterns in them,” Dr Croft said.

“That pattern corresponded to the molecular code for protein glycosylation,” he said.

“We were able to infer that even though these peptides were not actually glycosylated, they represented regions of proteins that had been previously decorated with sugars.

“The point of the paper was that we were proving that the immune system is not only able to indirectly sense protein glycosylation, but that it does so constantly.”

A peptide that had undergone glycosylation could make an attractive target for immunotherapy, he said.

“I think it’s another way that can help us identify potential glycosylated proteins,” Mr Mei said. “Glycosylation is important in biological events and its dysregulation is associated with many diseases,” he said.

Professor Purcell commented that, “These deamidated asparagine residues represent the scar of previous glycosylation and will form important targets when glycans are added to proteins inappropriately, which may occur in cancer or during infection.

“It has not escaped our attention that the main target for a SARS-CoV-2 vaccine is the heavily glycosylated spike glycoprotein. Although current vaccines are primarily aimed at generating neutralising antibodies, ongoing research in our laboratories is investigating if deamidated peptides from this protein might form additional and highly efficacious targets for T cells.”

Dr Croft said the paper was another important reminder for T cell immunologists to always be thinking about modified peptides as viable targets.

Read the ASBMB Today commentary, titled Deamidation is rife in the immunopeptidome