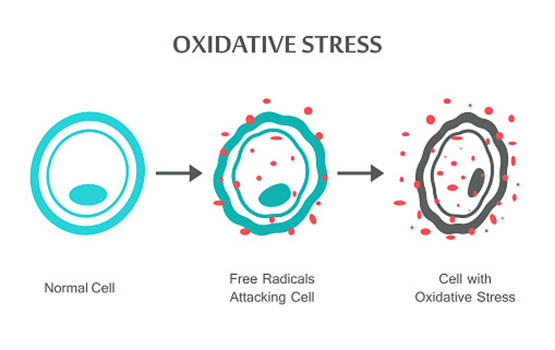 Scientists at Monash University’s Biomedicine Discovery Institute (BDI) have discovered a new role for a known protein in oxidative stress, which is linked to diseases such as Alzheimer’s and Parkinson’s, diabetes, cardiovascular diseases, viral infection and cancer.

When cells are stressed they get damaged; the cell can then either repair itself or if the damage is too great it can die. The BDI researchers looked at oxidative stress, a form of chemical stress, and found that the Importin-13 protein promotes cellular death pathways in response to stress.

The study, led by Professor David Jans and conducted by post-doctoral researcher Dr Kasia Gajewska, identified a new pathway regulated by Importin-13, which belongs to a superfamily of transporters in cells that move proteins, RNAs, and protein-RNA complexes in and out of the control centre of the cell and the nucleus, helping to regulate stress response pathways impacting cell survival.

The findings are now published in Nature Communications.

“We were able to identify that quite a lot of genes that respond to stress are dependent on Importin-13,” Dr Gajewska said.

“No one has really worked out that Importin-13 is important in stress – in fact, it may be one of the key things in responding to stress,” Professor Jans said.

“Our findings have relevance to other forms of stress such as heat stress relevant to climate change,” Dr Gajewska said. “Understanding the molecular basis of the impact of stress is more important than ever before.”

Importin-13 is conserved widely in evolution, meaning that the pathway potentially relates to many different organisms, including plants.

Although a basic science study, its authors are flagging Importin-13 as a potential target for drug development.

“Kasia has demonstrated that Importin-13 is of great interest as a target for an inhibitor,” Professor Jans said. “Inhibitors against these sorts of transporters have already been identified – we have worked on several for other transporters.

“This was a fantastic piece of work by Kasia,” he said. “It has great implications.”

Dr Gajewska, who works in Professor Jans’ Nuclear Signalling lab, was guided in bioinformatics by co-author Dr Mirana Ramialison from the Australian Regenerative Medicine Institute at Monash to conduct the bioinformatics and analyse the transcriptomic data generated, which used a knockout cell line. She was co-supervised by Professor Jans and Dr Kylie Wagstaff.

The study builds on previous work into Importin-13 by Professor Jans and Dr Kylie Wagstaff that spans a decade.

Dr Gajewska is currently working on Importin-13’s critical role in neuronal differentiation. She is keen to pursue studies into the potential role of the protein in neurodegenerative diseases since oxidative stress is thought to contribute to neurological cell death and dysfunction.