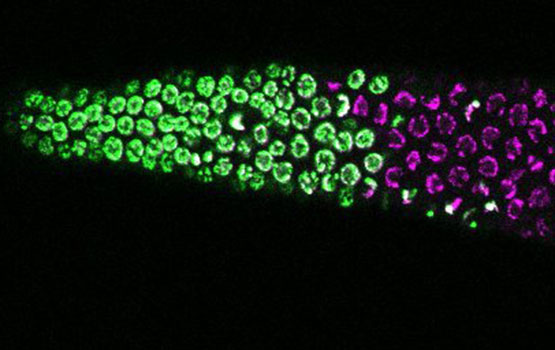 The worms (Caenorhabditis elegans), used because many of their genes are also found conserved in humans, allowing insights into human cells, have both sperm and oocytes (eggs) and produce around 300 progeny (offspring) over three days.

The study screened through molecules to identify their function in the germ line, knocking down hundreds of genes one by one to see if there were defects in the number of progeny being produced or in the germ line itself.

It found that by removing MOG-7, the worm produced no progeny, rendering it sterile.

Remarkably, they found that re-supplying MOG-7 after a period of time meant the germline became fertile again.

Led by Professor Roger Pocock the study found that MOG-7 was involved in RNA splicing, the process by which intervening sequences within genes are necessarily removed before the gene can make a protein.

The germ lines sense when they’re defective and through the process of apoptosis or programmed cell death, kill and clear up defective germ cells, Professor Pocock said.

“What we found 18 hours after we re-supplied the germ line with MOG-7 was a massive burst of apoptosis, and then the germline starts replenishing itself with new germ cells, enabling the worm to make sperm and oocytes again,” he said.

“We wanted to understand how the germ cells that produce sperm and oocytes are generated to enable the animal to make so many progeny so quickly.”

The findings, now published in the journal Cell Death & Differentiation, provide a new understanding of the previously uncharacterised protein, MOG-7 enabled germ lines - the cells that pass on genetic material - to functionally recover if damaged.

“Almost every gene in the germ line was defective when MOG-7 was removed. We found over 5000 genes in the germ line were not functioning properly and that caused many defects in the cells,” Professor Pocock said.

“We found that during the process of knocking down this gene there’s a very small subset of cells that arrest, staying in a quiescent state until conditions improve. When we restore the MOG-7 gene the cells re-enter the cell cycle and produce more cells – that’s how the germline can replenish itself.

“The research shows that the germ line is very resilient,” he said. “A kind of plasticity.”

Professor Pocock said similar results by another research group 13 years ago showed germ lines could restore after worms were starved and lost fertility.

“What’s new in our study is that we characterised this gene and that hadn’t been done before – no one knew what it did,” Professor Pocock said. “I think what’s really cool, too, was that we were able to manipulate its expression for precise temporal windows and regulate whether the germ line generated sperm or eggs!” he said.

Instrumental to the study was research fellow Dr Wei Cao, first author on the paper.