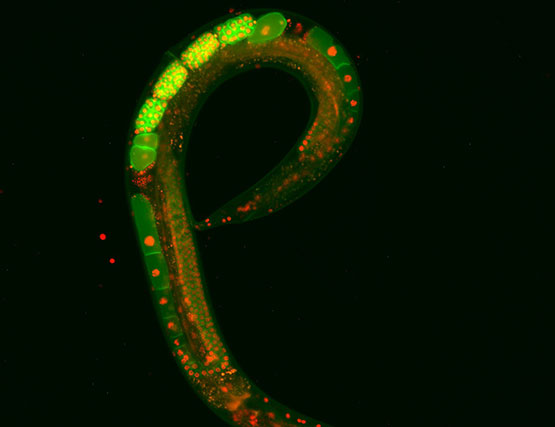 A recent study by the Monash Biomedicine Discovery Institute (BDI) using roundworms has discovered that a conserved syndecan protein coordinates communication between the germline and the rest of the body and that this communication mechanism is required for germ cells to divide correctly to generate offspring.

The worms (Caenorhabditis elegans) are used because many of their genes are also found conserved in humans, allowing insights into human cells This new work shows that syndecan acts on the surface of the germline (containing germ cells that generate the eggs and sperm) to control germ cell division. It does this by regulating the levels of a highly conserved protein (called the Notch receptor) that in humans controls germ cell development and fertility.

The findings are now published in Nature Communications.

Led by Professor Roger Pocock, the study found that sugar antennae attached to syndecan are crucial for the control of germ cell development, but says the next steps are to identify the signalling molecules that communicate to the germline through interactions with these sugars.

He adds: “There are a plethora of molecules that may interact with these sugar antennae to control syndecan function and how it goes on to control the germline.”

“Our findings have launched a new area of germ cell biology research that will attempt to identify and dissect the function of these signalling molecules that could be related to diet, toxin exposure or infection.”