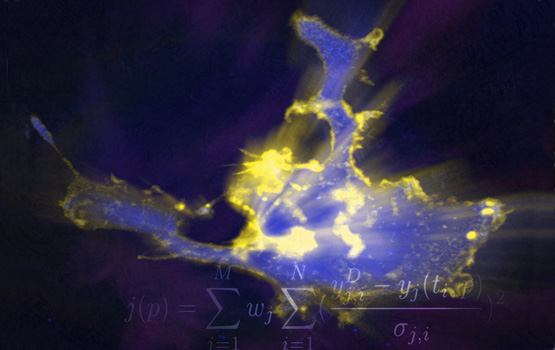 Researchers have discovered a crucial mechanism that regulates cell growth and survival. In this image a cancer cell (blue) reacts to removal of this mechanism. This causes critical changes in cell behaviour (yellow). Maths equations central to this work are superimposed across the image.

Researchers have identified a key part of the pathway in cell communication that controls insulin in the body that may eventually help in developing treatments for diseases such as diabetes and cancers.

The collaboration involving Monash Biomedicine Discovery Institute’s Dr Lan Nguyen together with Professor David James and Dr James Burchfield, from the Charles Perkins Centre, University of Sydney has revealed a new piece of the cell signalling puzzle and provided new understanding of how the insulin signal is propagated and controlled.

The findings were published in the journal ‘eLife’ today. 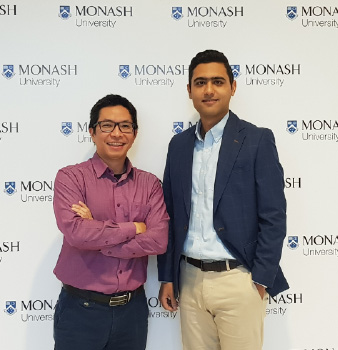 Insulin increases in the body following a meal as a signal to muscle and fat cells that there is excess glucose in the blood they need to remove and store. This process does not work properly in diseases such as diabetes. Furthermore, insulin can have profound effects on cancer progression. Understanding where the signalling process could go wrong is crucial for understanding disease development and designing new treatments.

“We’ve discovered this new negative feedback loop that is a powerful regulator of the insulin signalling network, which is moderated by a number of proteins including a protein called AKT,” Dr Nguyen said. “Negative feedback is like brakes in a car that can be lifted on and off,” he said.

Dr Nguyen added the multi-disciplinary collaboration arrived at the critical mechanism through a combination of predictive mathematical modelling, led by his group, and cell biology and live cell microscopy, led by Charles Perkins Centre scientists. “Modelling allows us to narrow down hypotheses and direct experimental testing to the best ones.”

“This new piece of the cell signalling puzzle that we have discovered increases our understanding of cell communication, which is essential for generating therapeutic strategies to treat diseases such as cancer and diabetes,” he said.

“In cancer what happens is that if a key negative feedback mechanism breaks down, then the growth signal that is normally kept in check by the mechanism could go up uncontrollably in a cell, and this could underpin the development of tumours,” said Dr Nguyen

“Moreover, the treatment of anti-tumour drugs may inadvertently relieve physiological negative feedback signals, leading to compensatory tumour growth and ultimately resistance to the drugs. Thus, identifying negative feedback mechanisms and understanding how they work will aid the development of better cancer therapy,” he said.

Further studies will be required to determine how scientists can leverage this new information in order to improve human health.

Dr Nguyen is also a Mid-career Research Fellow with the Victorian Cancer Agency.