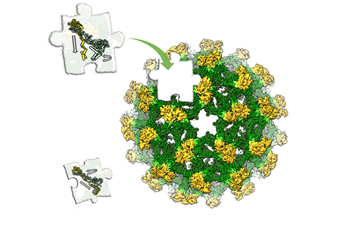 The cryo-electron microscopy reconstruction of Binjari virus provides the missing piece to correctly model the architecture of immature flaviviruses. The largest piece depicts the collapse of the spike required for the acquisition of infectivity. The smaller piece represents a previous model that does not fit with the new structure.

Latest research led by Australian scientists is a major step forward in the development of vaccines against flaviviruses, which infect more than 400 million people a year resulting in diseases such as dengue, yellow fever, West Nile, Zika and Japanese encephalitis.

In a study published today in Science Advances, a team led by Associate Professor Fasséli Coulibaly, from Monash University in Melbourne, Australia, and Associate Professor Daniel Watterson, from the University of Queensland, have generated for the first time a complete high-resolution structure of an immature flavivirus - revealing that previous assumptions about how these viruses form has been wrong and providing a key to future vaccine development.

The development of vaccines against flaviviruses is an issue of ever-growing importance, because these pathogens continue to be a considerable medical problem in large areas of the world and new threats continually arise from the spread of flaviviruses to new geographic regions, as happened with the rise of Zika virus just before the Rio Olympics.

Since the first structure of an immature flavivirus was generated over 18 years ago, some key details have remained elusive due to "blurred" views of the virus structure before its metamorphosis into infectious particles.

According to Associate Professor Coulibaly, technological advances and a focus on a unique insect-specific virus “have allowed us to study the structure of flavivirus with an unprecedented level of detail”.

This breakthrough originated from a structure of the Binjari flavivirus, isolated in Australia from infected mosquitos and engineered as a vaccine platform by the University of Queensland team.

“Obtaining the right ice thickness is crucial in seeing the finer details of the virus or else it is like looking through frosted glass and everything is blurred,” Dr Hardy said.

Associate Professor Daniel Watterson, from the University of Queensland, said the discovery was a surprise.

“Imagine trying to build a house when your blueprints are wrong – that’s exactly what it’s like when you’re attempting to build effective vaccines and treatments and your molecular ‘map’ is not quite right,” he said.

Associate Professor Coulibaly added: “Based on this new structure, we now know that the mechanism of maturation of flavivirus can be described as a guided collapse of viral particles.  It will make the development of better vaccines against these relentless viruses more attainable.”