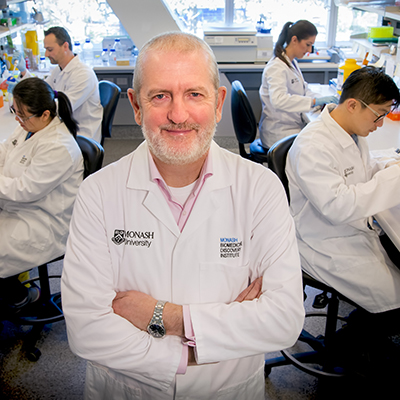 Synovial sarcoma is a subtype of soft-tissue sarcoma, a group of malignant tumours originating from connective tissue in the body. Treatment options are limited and survival is poor.

The Monash BDI researchers, led by Professor Roger Daly, collaborated with Dr Emmy Fleuren and other scientists from the Institute of Cancer Research in London, and from Radboud University Medical Centre in Nijmegen, the Netherlands, and other institutes, to investigate what drives sarcoma progression and to identify targeted therapies.

Professor Daly’s laboratory took a novel approach using a technique called mass spectrometry, which enabled the scientists to look at large numbers of proteins across cell lines derived from different types of sarcomas and identify those driving aberrant growth.

They identified two suspect proteins, called ALK and MET, in subsets of synovial sarcoma, validating their observations in preclinical models and in patient specimens.

“It’s exciting to apply a new technique which looks at proteins rather than DNA, and be able to identify novel therapeutic targets,” Professor Daly said.

“This provides a proof of principle for our approach, and means that we can now go ahead and apply this to other cancers,” he said.

Importantly, drugs are already available against the two proteins that are currently being used to treat other cancers, he said. However, clinical trials would be needed to test for their appropriateness in treating all forms of synovial sarcoma, the researchers said.

Dr Fleuren said that despite intensive treatment options including chemotherapy, radiotherapy and surgery, the prospects for synovial sarcoma patients were poor.

“This disease can have a devastating impact, particularly among young patients and in the metastatic setting,” Dr Fleuren said.

“At the moment, sarcoma patients are generally speaking treated in a one-size fits all strategy – there’s a critical need for new approaches and for developing personalised treatments with more efficacy and less side effects,” she said.

The findings were published today in  the journal Cancer Research.

Scientists involved in the international collaboration, which also included the Garvan Institute of Medical Research in Sydney and Peking University Cancer Hospital & Institute in Beijing, are expected to pursue further research and clinical trials.

Professor Daly’s laboratory is applying the novel approach to other cancers including Triple Negative Breast Cancer.

This research was supported by the Synovial Sarcoma Research Foundation, the Radboud AYA foundation and the National Health and Medical Research Council of Australia.