A stop motion animation film, written and illustrated by a group of students from a refugee background has premiered at Federation Square as part of Refugee Week 2018.

The film – Ali and the Long Journey to Australia – is the result of a collaboration between Noble Park Primary School and Monash University.

A group of 13 students from seven countries combined their imagination with personal experiences to create the story of 10-year-old Ali and his family’s search for safety.

According to Mervi Kaukko, a Monash researcher investigating what helps refugee students be successful at school, the idea to create the book came from the students themselves.

“Our research took 18 months, and the children shared many stories. But they told me they wanted their story to be heard beyond academic papers, so they decided to write their own book.

“We worked with professional animators to turn it into a film.” More than 2,500 still images were used to create the action.

11-year-old Sithwat – who started school speaking no English five years ago — took part in the project.

“It’s pretty awesome. I had never written a book but I always wanted to.

“I was really excited to see it, and also proud of myself."

But seeing it produced into a film was amazing, “I couldn’t believe it. The bodies move! How do you do that?” 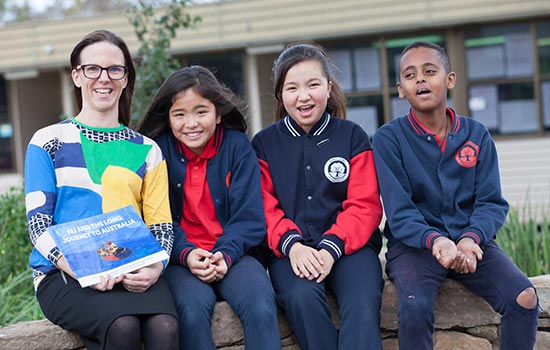 The story behind the film

Over a school term, Mervi worked with the students who co-wrote the story, researched and illustrated backgrounds and created plasticine figurines.

10-year-old Nathan, a co-creator of the book, narrates the story.

According to Noble Park Principal David Rothstadt, 46 languages are spoken at his school, with more than 90% of his students come from non-English speaking backgrounds.

The book is used as part of the school’s reading program, and David says he is delighted to see the story coming to life in a new way.

“The kids were blown away by seeing their book come to life. They absolutely loved it. You can get a sense of the emotion in each one of the scenes. Some have a sense of urgency, some fear and others have joyful moments.”

Mervi says that Ali’s story reflects the findings of her research with refugee-background students in Finland and Australia: that successful refugee students find a way to use their experiences to help them learn, adapt and thrive in a new country.

“Some of the children spoke about horrible stuff, experiences no child should have, but they found ways to think positively about what they have learnt in those situations.

“We found school practices — which build on students’ strengths, rather than focus on the gaps— played an important role. Teachers went that extra mile in getting to know the students and their families and that made a big difference.”

Creating safe physical spaces for children in both the classrooms and the playgrounds is the final factor, Mervi says.

“Children at Noble Park are encouraged to build spaces — hiding places, nests and nooks, where they feel safe and happy. These spaces were important for play, but also for the children’s learning.” 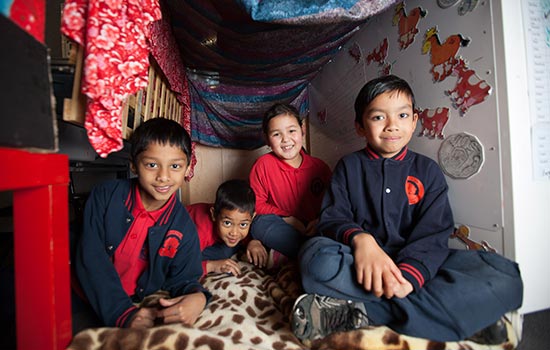 Nur, Budin, Moji and Faris in one of the nooks created in classrooms at Noble Park Primary School.

Using the film in the classroom

Expert teachers from Monash and some Victorian schools also suggest that the film can be used as introduction about refugee experiences in any age group.

Younger students could watch the animation and write informative texts or their own, imaginative texts on a displaced child/family/animal/fairy tale character.

Older students could do research and write persuasive texts regarding Australia’s refugee policies.

The animation could be used to teach reading and viewing strategies. For example:

For newly arrived students (with or without refugee background), the animation could be used as a springboard to talk and write about their own experiences of coming to Australia.

Discussion could be turned into videos, cartoon strips, drawings, or other media.

“If the animation is used with students with similar experiences, the possibility of resurfacing trauma should be considered. If a student seems to be uncomfortable, they should be referred to get help,” Mervi recommended.

The book and film are a part of a larger, Finnish-Australian research project entitled Educational Success through the Eyes of a Refugee Child, conducted in collaboration with Jane Wilkinson. Anne Keary and Kay Rothstadt contributed to the teaching resource.