This project has been a great fit for me. My own interests as an educator and a historian made it of interest for a number of reasons. Having taught in schools and universities – of varying degrees of elite-ness – I was keen to understand how education, class, colonialism, and globalization intersected in different settings. I also wanted to know where the current discussions about social elites, especially in education, stood. There has been so much work done by scholars on the working classes, it seemed an obvious omission to not focus on how the upper classes thought and lived. And ethnography was a method that I’d long harbored an interest in. The idea of fieldwork appealed especially; so too did the way scholars in different disciplines have developed the approach in the last few decades.

Coming into the project my destination was not clear. Malaysia, Ghana, and Egypt were the likely candidates and then, serendipitously, Buenos Aires emerged as the port of call. It was a bit of an anomaly in the British colonial experience; but the concept of informal imperialism, and the large number of British schools in the city, made for a perfect location. Fortunately Argentina was a country in which I’d spent some time and one that I’d followed closely since the economic crisis there in 2001. I travelled to Buenos Aires in 2011 and conducted my fieldwork in an elite British-tradition school that, as far as I could tell, welcomed my presence.

My brief was to look at political culture in the school – how those in the school’s community saw themselves as political actors in a society with a past of social upheaval and in a world that was subject to shifting forces and futures. I sought answers by hanging out in the school, interviewing people, and chatting with other locals. But I also undertook archival research and made some connections with scholars there.

I am currently sifting through the collected material as well as the complexity of the history and politics of the site. All of this is happening while I am positioning my work in discussions, past and present, about education, globalization, and social theory. In other words, questions arise and I attempt to answer them. How can I describe a site in nation with a formal and informal colonial past? Is site the right word when engaging with the idea of “global ethnography”? In what ways is the ideology changing in Argentina and the world in the supposed wake of neo-liberalism? How do the subjects of my investigation see themselves politically? What are the class terms that they use or others use for them? How does the school fit into ideas about transnational classes, superrich, or the one percent? And surely football has got something to do with it? 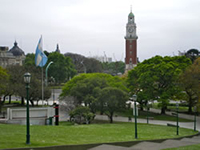 The "English Tower" facing the "Monument to the Fallen in Malvinas" in Buenos Aires.