Monash at COP25 – beyond Net Zero

Two of the grand challenges facing humans today are mitigating climate change and eradicating poverty. One of the United Nations’ Sustainable Development Goals is to ensure access to affordable, reliable, sustainable and modern energy for all. Achieving this goal requires international cooperation. The UN Climate Change COP25 Conference (2nd to 13th Dec. 2019) attracted around 25,000 delegates. Attendees include a range of global climate action stakeholders: youth, universities, NGOs, industry and government delegations. The main focus of the conference was on the negotiations around Article 6 under the Paris Agreement.

On the 4th and 5th of December 2019, our Monash delegates operated a booth creating a hive of activity during which the Monash Energy Institute's research agenda was disseminated. Visitors inquired about the climate-focused initiatives across Monash (including the Net Zero Initiative), our delegate presentations, the Master in Environment and Sustainability (Faculty of Science) and the Master in Regulation and Compliance (Monash Business School).

People will power the transition to a low carbon economy… 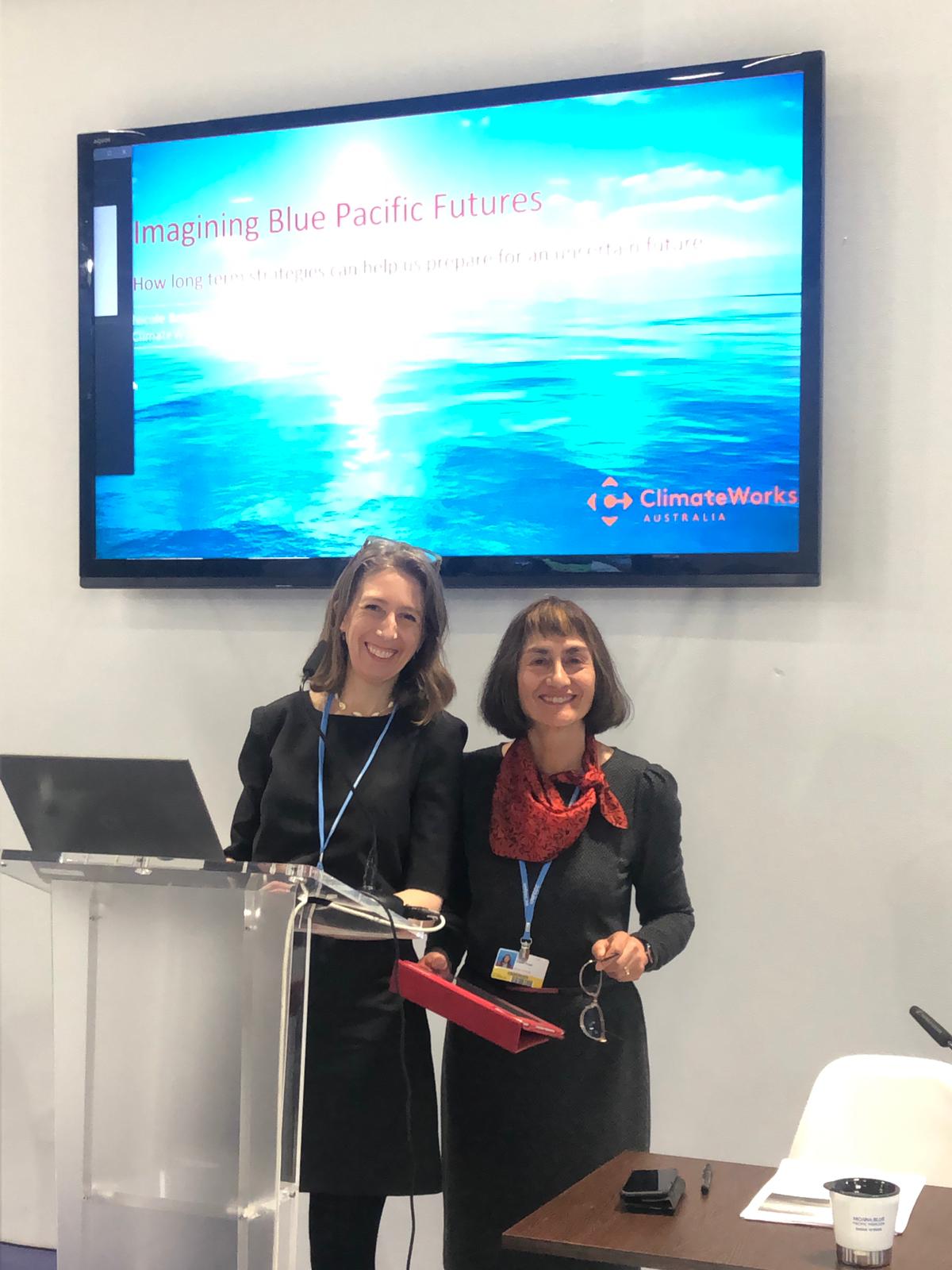 Dr Diane Kraal, Senior Lecturer, Department of Business Law & Taxation, co-team leader of COP25 define a COP for us “If you try to think of the COP as three concentric circles: the outer circle comprises non-government organisations, constituencies that include RINGO (Research and Independent NGOs), a grassroots group. Coming in further, are the government-sponsored pavilions, with displays and discussions that support business initiatives and feeds off free-flowing NGO dialogues. Then there is the inner circle, which involves county-to-country negotiations about the Paris Agreement. Here each provision is argued about, word-for-word, as seen with Paris Agreement, Article 6. That’s Cop25!”

There was a floating feeling of “lack of action in the negotiations” dominating COP25. Dr Roger Dargaville, Senior Lecturer in Renewable Energy, Civil Engineering Department, notes that “this CoP was not expected to be particularly momentous in the way that the Paris CoP21 in 2015 was but should have made significant advances on agreeing how the Paris commitments for the period 2020 to 2030 are going to be achieved. However, progress was frustratingly slow and many of the issues surrounding the market mechanisms (so called Article 6) and Loss and Damage (where developed countries are expected to provide funding to developing countries to help deal with climate change impacts) have been ‘kicked down the road’ to Glasgow for CoP26”.

Dr Kraal precises that Article 6 covers national decarbonisation commitments (NDCs), and accounting for carbon credits – to prevent double counting. “The topics of research interest from article 6 extends to: climate finance, climate adaptation for Pacific Islands, industrial ecology, climate migration, climate change and health, transboundary water migration, climate justice and energy justice - my area. Energy justice provides a decision-support tool for policy makers to bring into balance the competing aims of economics (e.g. energy pricing), politics (e.g. energy security) and the environment (e.g. sustainability of biofuels), known as the energy trilemma.” She notes that “Australia has committed to reduce 26 to 28% of our current emissions by 2030. The US has not yet formally withdrawn from Paris Agreement negotiations: but watch this space. The EU leading in decarbonisation. The UK is being distracted by Brexit, but still has many renewable initiatives”.

Dr Kraal, moderated a presentation by Nicole Baker from Climate Works with discussants from Tonga and the Marshall Islands. The topic was long-term climate change strategies for Pacific Islands. “The Marshall Islands and Tonga were the countries that inspired me the most as they are frontline climate change victims”. Unfortunately, there is still no resolution on the funding for this type of transition.

Last year, resolutions were only found on the last days of the conference, and this year is no different with regards to the Paris Agreement discussions. A/Prof Gerry Nagtzaam, Associate Professor, Law Resources, mentions that nothing has actually been decided regarding Article 6 except for proposal to amalgamate clauses 6.2, 6.4 and 6.8 to try to resolve. Agreement as not been reached on critical issues such as financing and adaption and transitioning from Kyoto to Paris.

However, despite the lack of action in the negotiations, Dr Dargaville mentions that the side events were filled with a sense of moving forward and even of optimism. “In the exhibition centre, various countries and NGOs hosted dozens of pavilions, running seminars and workshops on a broad range of topics such as the latest science relating to the cryosphere, progress in deploying renewables in developing countries, and negative emission technologies. I had the honour of speaking on two panels, the first, with my Monash colleague Dr Susie Ho (Faculty of Science) in the WWF Pavilion on the topic of turning climate science into climate action and secondly in the China Pavilion on green manufacturing. I spoke about the opportunities for electrification of industrial processes and use of hydrogen as a vertical chemical which can be used as fuel for transport, a reducing agent in steel manufacturing or for grid connected energy storage. The second event in particular, attracted significant media attention with several stories running in the Chinese press. After Bonn (2017), Katowice (2018) and Madrid this year as co- team leader of the delegation, Dr Susie Ho, Senior Lecturer in the School of Biological Science, was able to feel the differences between these COPs. “This year, the mood was low in terms of negotiations. The discussion focused on gender, which was good, but we would have expected this to be a side conversation. The main piece was not achieved, which was disappointing. Australia lagged behind and slowed progress alongside Brazil and the US. Non-state actors continued to be show stoppers and leaders in achieving climate action. Youth, like Greta, helped promote a science-based dialogue which is sometimes missing at COP and this can sometimes help to cut through debate. Youth action and youth promoting science and science-based dialogue on climate was inspiring. There were many protests, promotions through IPCC and other events where youth raised their voices and got behind the science. This gives me hope for the future”.

For Susie, COP25 provided an opportunity for researchers, educators and students to collaborate further and explore all the dimensions of energy, whether these are social or technical. Susie participated to a lot of side events, often joined by her Master of Environment and Sustainability students. “Higher education is increasingly viewed as an important contributor to climate action in terms of research informing action but more so in being a model for society in terms of how our campuses are transitioning to Net Zero. Non state actors, and groups such as universities, Ecos and the Climate Collage, helped to promote climate literacy as a path to change”.

Speaking about students leading the change. Peter Lusis, Energy Optimisation and AI PhD candidate from FIT, was part of both COP24 and COP25 Monash delegation. This year, Peter also attended the COP25 as a member of the Latvian delegation with the main purpose to focus on the negotiations around Article 6 under the Paris Agreement. “I much more followed the negotiations, what truly made me understand the challenging process. To make any rule-change under the Paris Agreement and facilitate climate change mitigation, it must been adopted by all 197 countries/states.” For Peter, compared to the COP last year, there was a stronger focus on hydrogen as one of the potential solutions. There were also a lot of conversations about increasing the efficiency of project implementation, capacity building and knowledge transfer. “This year we had Greta Thunberg. She invited scientists from IPCC to remind that the science is the only opinion that matters”. Before the conference, Peter knew that he had an opportunity to present his ‘science’ or PhD research at one of the side events. “It was even better that I had an opportunity to moderate a few side-events where Monash collaborated with multiple universities from the US, which were all supporting climate action despite the US government’s position on this matter. I presented my PhD research at Development & Climate Days. I explained how digital technology can improve electricity network resiliency and why smart homes, rooftop solar PV, electric vehicles, and energy storage can operate together smoothly only with centralised control. I was also interviewed by the largest Spanish newspaper El Pais about my PhD and Monash University’s commitment to achieve net zero emissions by 2030".

Find out more information about the COP25 and our extended Monash delegation.

Find out more information about the Net Zero Initiative.

Read more about the stories in the Chinese press: