Colin Kang did a Bachelor of Chemistry and Biological Chemistry at Curtin University Perth. “I was interested in general Chemistry and was introduced to research. At this point, a new class of fascinating solvents, ionic liquids, caught my attention due to their astounding properties, such as high thermal and chemical stability, low volatility and ideal electrochemical properties – with an endless list of uses and applications”.

For him, renewable energy is essential for the development of the world. He really became engaged in the energy sector after learning about the various projects in energy production and storage. We're familiar with the huge amounts of greenhouse gases emitted and its effect on a global scale, but the ability to harness and utilise renewable energy shouldn't just be a luxury; it should be readily accessible, to all parts of the world, for everyone.

Monash University and ACES affiliate PhD student Colin Kang recently submitted his thesis. He started a PhD research at Monash University in 2016 in the McFarlane lab. He enjoyed the ability to decide which direction to follow and have a research with impact. His PhD project focused on the synthesis of ionic liquids for the conversion of dinitrogen to ammonia. He worked with a range of people and always tried to understand the very diverse research field within ACES. His PhD was also an opportunity to make connections with students and staff from other universities. “I thoroughly enjoyed the research undertaken here, not just my own research topic but the breadth of energy research that is going on throughout the University. We all do important work, so we should share this more often and allow possibility of great discussions and collaborations. ACES allows this. The Monash MEI events do the same, engaging with people from other faculties with different pieces of the puzzle toward a renewable energy society. The research under the supervision of Prof. Doug MacFarlane was a constant learning and discovering experience. The fact that my research could have an impact was exciting and certainly makes for an attractive career path.”

Colin is interested in ionic liquids as electrolytes, particularly for energy applications. These materials have a wide-range of properties usable in many applications: from electrochemical electrolytes to gas capture, sensing to thermal storage, and recycling biomass to catalysis. “The global context of my project involved the sustainable production of ammonia, as a readily transportable energy carrier. By driving this process using renewable energy at room temperature and pressure, we aimed for a green process of harnessing energy from areas that are 'rich' in renewables (such as the solar energy, here in Australia), exporting it to countries that are limited to such energy; this allows everyone to utilise this energy for everyday life such as powering cars and providing electricity to homes. Where I came in, was to design and synthesise ionic liquid electrolytes that favour the conversion of nitrogen gas into ammonia (as opposed to hydrogen formation as a side reaction). We found that a class of chemical compounds - call these fluorinated electrolytes - are able to dissolve much more nitrogen gas compared to water-based electrolytes. This increase in concentration of nitrogen gas allows for a better conversion efficiency (or electrochemical selectivity); in other words, we can utilise more of this renewable energy and reduce 'energy wastage'.

Outside of research, his interests lie in the wildlife of camping and hiking. He is now going to continue his career path with a post-doctorate position at Deakin University with Chief Investigator Prof Jenny Pringle he met through ACES. He transitioned into battery research for energy storage as part of the Centre for Future Energy Storage Technologies (StorEnergy) where his project involves the design and synthesis of new electrolytes (including ionic liquids) for batteries with the aim to enhance performance and safety. 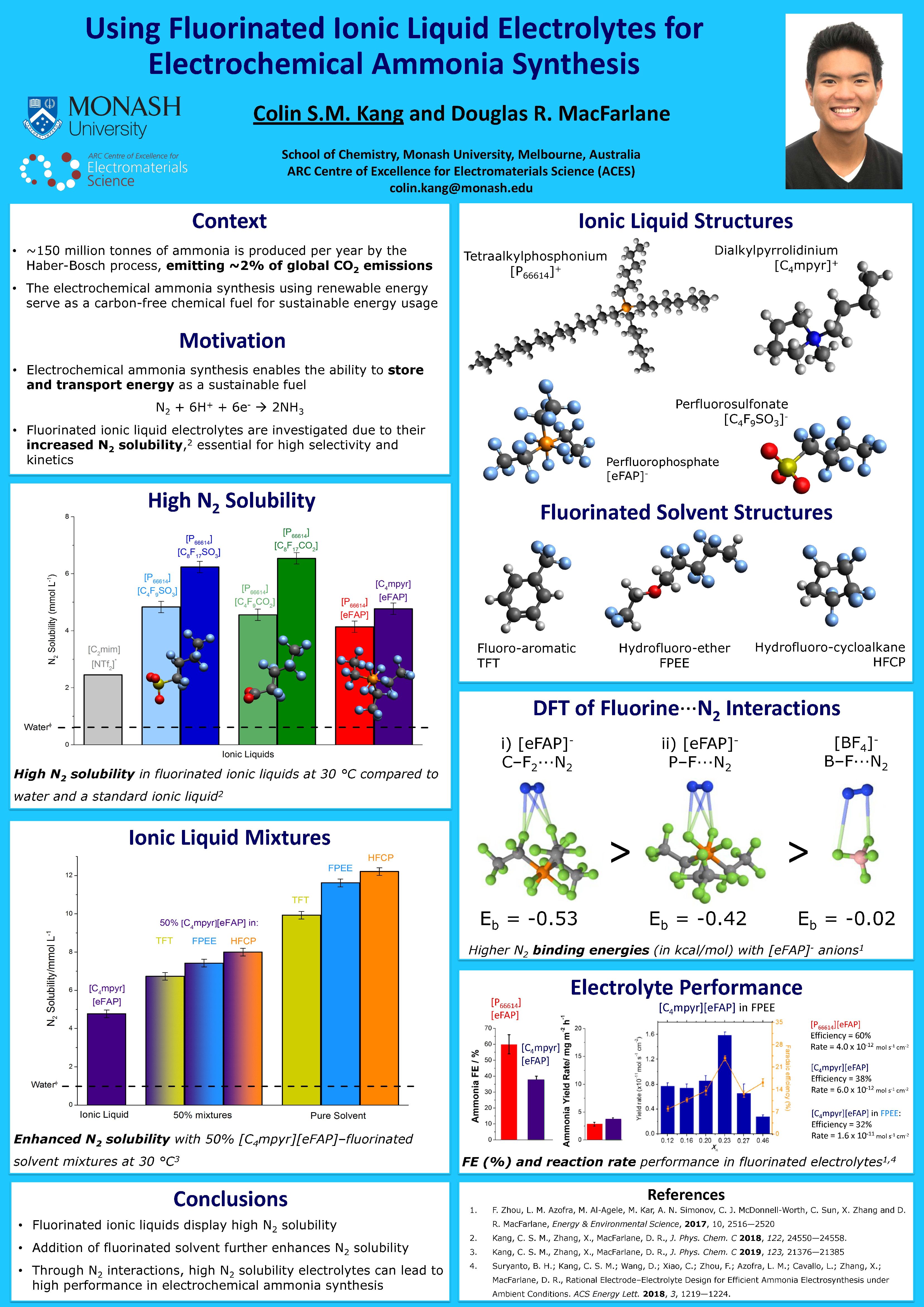