Milad Zarif Mansour did a Bachelor in Electrical Engineering, majoring in control systems (University of Tehran, Iran) and a Master in Electrical Engineering, majoring in power systems (Sharif University of Technology, Iran). “My father is an electrical engineer, so when I was a little kid, I wanted to be an electrical engineer, even though I didn’t know what that was yet. I was kind of aware that I was going to work in the sector. I had many different admissions from different places and other countries, but Behrooz was my motivation to select Monash. I met him at a seminar about 4 years ago when I was doing my Masters. From then, I was in contact with him for about a year before I joined Monash. He is nice and knowledgeable and that’s what you need in a supervisor.”

Power engineering changed these last 8-10 years. Traditionally, we had two main focuses: 1) issues related to the conventional synchronous generators, such as dynamic of the power system and 2) some power electronics that had limited usages in the industry (such as voltage regulators, etc.). The latter was not a big concern for power engineers due to their limited usage compared with the overall generation. Today, the integration of renewables made us focus on the dynamics of these inverters and their effects on the stability of the grid. By replacing traditional fossil-fuel synchronous generators with renewable energy resources, different issues including lower inertia and stability margin raised in the system. “If we want to have a higher percentage of renewable energy resources integrated into the grid, we need to figure out a way to integrate them without instability or without deteriorating the system strength. I am working on grid-following inverters, i.e., almost all of the inverters implemented into our current grid, as only a few of them are grid-forming inverters (GFMIs), and currently, I think in Australia the only company which is implementing these inverters is ABB. The grid-following inverters are not 100% perfect, but I have implemented some of them in some special microgrids and if we have the required inertia and system strength in a microgrid, I think they can work properly. The main goal that we have is maintaining the stability of the system.”

Milad Zarif Mansour’s PhD research, supervised by Dr Behrooz Bahrani (Senior Lecturer,  Faculty of Engineering/ Department of ECSE and Director of Grid Innovation Hub), focuses on the stability of grid-connected renewable resources while connected to a weak-grid via Voltage Source Inverters (VSIs).“My PhD project is about the stability of grid-connected renewable energy resources focusing on two main aspects: 1) stability analysis, and 2) increasing the stability margin. The VSIs control loop, particularly the Phase Locked Loop (PLL) is playing a key role in allowing the system to work properly with a weak grid.”

Milad has been working on devising a Feedback Linearisation stabiliser for the PLL and the outcomes show that this controller is working effectively and contributes to the stability of the system (Fig. 1 and 2). Fig. 1 shows the simulation results of a traditional grid-following inverter when it is integrated into a weak grid, whilst Fig. 2 presents the simulation results of the compensated system connected to the same grid.    “The duty of the PLL is to capture the phase of the grid voltage and based on its active or inactive power references, will synchronise its voltage with the grid voltage, so that it can eject the desired active or reactive power into the grid. The performance of the PLL will degrade as the grid strength reduces in weak grids. The effect of the grid impedance on the PLL can cause instability in the system. If the grid impedance decreases, it can contribute to the stability in the system, and the stability margin will be wider (presented in my upcoming publication). During the continuation of my work, I am planning to use a hybrid structure for the VSIs control that has the benefits of both grid forming and grid following structures.”

Milad also found a stability region using the nonlinear model of the system.

He has already used his results towards real-world applications, proposing a new Grid Strength Index.

One of his early findings is employing Feedback Linearisation method (a nonlinear control design) that can contribute to the stability of the system. The results of this study are published in [1]. Fig. 1 shows the simulation results of a traditional grid-following inverter when it is integrated into a weak grid, whilst Fig. 2 presents the simulation results of the compensated system connected to the same grid. The proposed method can maintain the stability of the system. 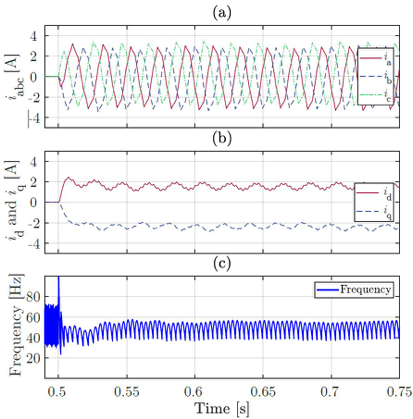 This year, Milad Zarif Mansour received a top-up scholarship from the Monash University Grid Innovation Hub (GIH) for his contribution towards Grid Stability. “Renewable Energy Resources and the grid are hot-topics. The main outcome of doing a PhD for me is being a better researcher and polishing my knowledge in power electronics and control. We have different industry partners in GIH helping us to become more familiar with the real issues the industry is facing. In contrast to many fields of study, in this field research sectors and industries are not far from each other; hence, getting ideas and information about industry issues can provide us with a pathway for our research. Thanks to funding from ARENA, we have access to perfect facilities in our lab now, which are a blessing in our research. In a nutshell, we have a more equipped lab, and this is crucial in our field”.

In 2021, Milad would like to see more research towards stably increasing renewables into the grid. “The main goal of this field is increasing the penetration of renewable energy resources; therefore, I hope we can considerably increase the injected power into the Australian grid in 2021”.