Thomas Blesch is a 3rd year PhD candidate at Monash University. He started with Prof. Douglas MacFarlane’s group in February 2018, co-supervised by Prof. Patrick Howlett from Deakin University and funded by the ARC Centre of Excellence for Electro-materials Science (ACES).

Thomas has gained experience in energy storage projects in Germany where he studied Chemistry at the Friedrich-Schiller-Universität Jena. “In undergrad, I preferred organic and macromolecular chemistry, where the use of dyes and polymers in solar cells was my first contact with the energy sector. My bachelor’s thesis was about batteries based on organic radicals, and deepened my interest in electrochemical energy storage. Radicals have unpaired electrons which are ususally very reactive. Some organic molecules can stabilize these unpaired electrons, so, they can be used to store energy. This way one can build an organic radical battery (ORB)”.

When Thomas started his masters, ‘electromobility’, ‘energy transition’ and ‘renewable energies law’ were making headlines. His Master’s thesis with the BMW Group Labs (Munich) investigated lithium ion batteries for electric cars. “With elective subjects like “Energy Systems”, I could focus on this field, in Jena and at the Universidad Complutense in Madrid. I investigated how electrode composition and preparation impacts the performance in lithium-ion batteries, a great insight to research methods used in industry”.

Thomas’s PhD research focuses on redox flow batteries (RFB),where instead of being stored in a solid electrode (as for example, lithium batteries), the energy is stored in a liquidredox-active electrolyte. “This electrolyte can be pumped from storage tanks into electrochemical cells to be charged and discharged at porous electrodes with high surface area. This separation of storage and reaction sites means that the battery’s energy and power density can be scaled independently from each other, tailored to each use-case. They have the potential to be cheaper, safer and easier to scale and maintain than lithium alternatives. Li-ion batteries (LIBs) have 10 times higher volumetric energy density (to store the same energy, it needs 10 times less space) but they are flammable. If you have enough space next to your solar-park or windfarm, you might want to adopt redox flow technology, especially in fire-prone Australia. Also, RFBs have twice the cycle life of LIBs, as solid electrodes in LIBs will deteriorate/change structure over charging and discharging, while the liquid in RFB won’t change, or if it does, you can pump it out and replace it. The RFB was invented in the 1950s, but the most common type, based on Vanadium, has been developed since the 80s here in Australia, at the University of New South Wales”.

RFB Prototype RFBs gained more attention recently as an option for the storage of excess renewable energy, and one is installed here at Monash’s Clayton Campus. The goal of that project is to connect 20 buildings and run them on renewable energy using the Advanced Grid Management software platform of Indra Australia. The system installed inside the new Bio-medical Learning and Teaching combines a 180kW/900kWh vanadium redox flow battery system (well-researched, commercial type) working together with a 120kW/120kWh C1-rated lithium battery.” The system I’m working on is different, I use iron complexes in organic solvents (Image: Thomas's RFB prototype). The first difference between vanadium and organic solvents is the potential to have a higher energy density. The vanadium is in aqueous acid, limiting the cell potential (at ca. 1.3V water gets split into hydrogen and oxygen); whereas organic solvents have a much wider "electrochemical window" (my cell potential is 2.4V, but the solvents would be stable up to 5V). The higher cell potential enables a higher energy density, IF I can increase the solubility of the complex (energy density is the product of cell potential times active material concentration, basically). The second difference is the temperature window. Vanadium RFB only works between 10 & 40 degree Celsius; the system I'm using doesn't show that, also the organic solvents have a wider temperature window compared to water (-100 to +250 for organics vs. 0 to 100 for water). The third difference is the cost of active material: Vanadium is much more expensive than iron, but organic solvents are more expensive than water/acid, so that might cancel out.” 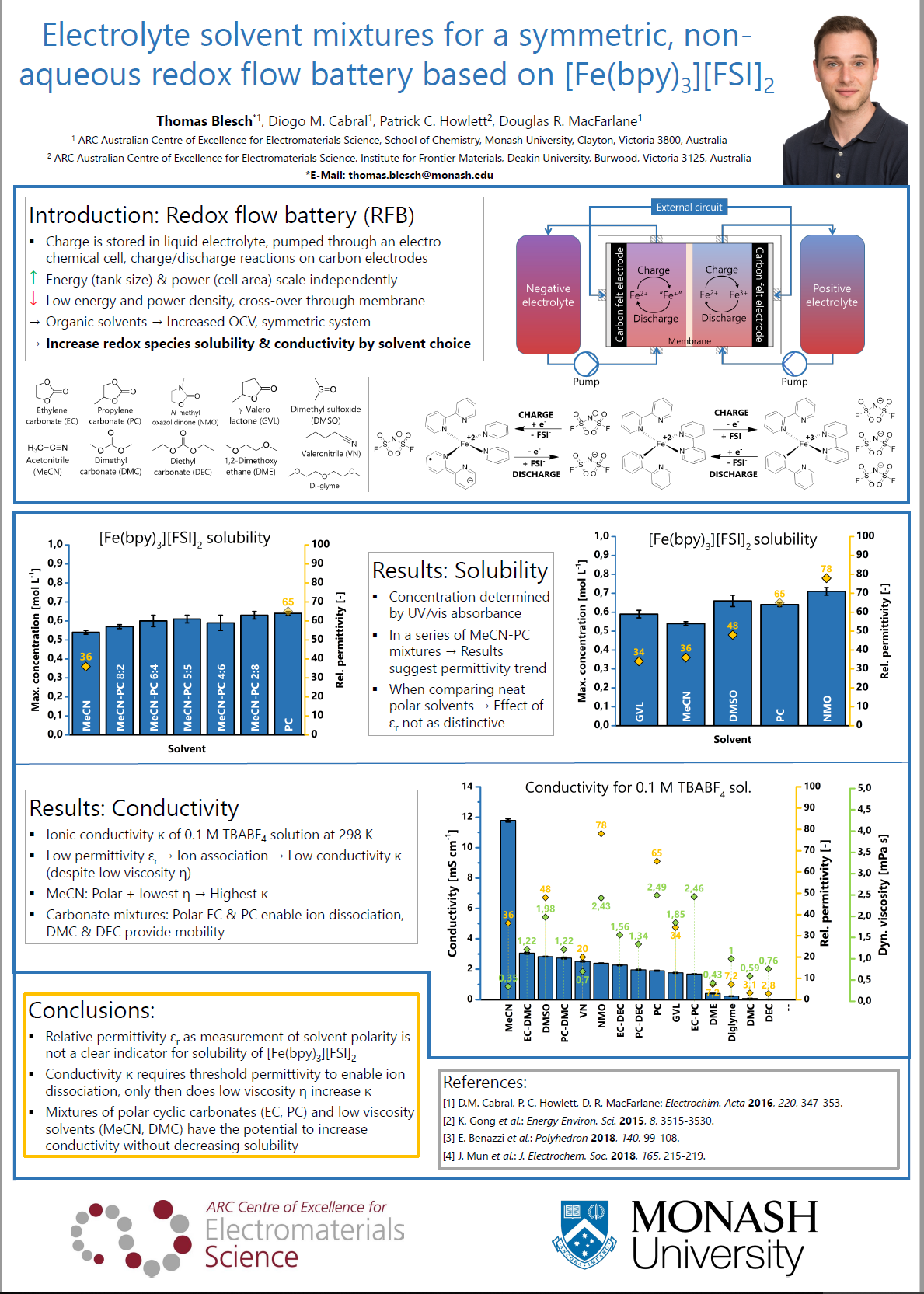 Thomas mixes work in the lab and in the office. “My daily activities are mostly focused on lab work, right now I’m investigating the solvent for the electrolyte and the electrode materials I later want to use in a lab-scale prototype RFB. I have a small prototype cell in the laboratory. These batteries can be the size of a building. Mine is the size of a coffee mug. For different solvents and their mixtures, I measure their viscosity (which affects the solvent’s ability to be pumped and to flow), conductivity (which affects power density) and how much of the active redox material they can dissolve (affects energy density). I test the carbon-based electrode materials with a set of electrochemical techniques to improve the kinetic reactions. The time in the office is to analyze my data and keep up with scientific literature. There is still a lot of work to do in the RFB field, which is good for me. It’s almost a metaphor for coming to Australia in general, this vast country with so much to see. Sometimes you get afraid that you might miss something, but usually it’s exciting exploring. Once you get used to driving on the left and celebrate Christmas in summer”. In the 2nd year of his PhD, Thomas continued his work on redox flow battery electrolyte, which is based on abundant and cheap iron complexes in non-aqueous solvents. "The synthesis is quite simple and easy to scale up, and I improved the purification process. That's important not only for freshly made material, but I also want to re-purify the electrolyte I used in the battery cycling, so it can be recycled for more sustainability. I did a number of measurements on the physical properties of electrolyte solutions (density, viscosity, conductivity, ionicity) and gained some insight on their correlation with factors like solvent type, concentration, temperature and battery performance". Another big part of last year's work went into further improving the lab scale flow battery prototype (pictured above). The latest design iteration considers the results from extensive testing of a range of materials for compatibility with the electrolyte and the voltage window used.