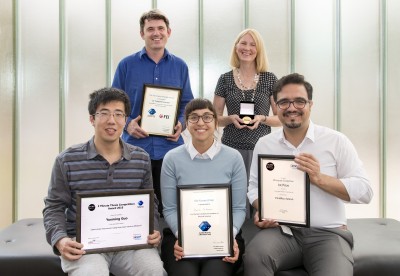 Our researchers have been recognised for excellence in research in electron microscopy, taking out both of the awards for research in the physical sciences awarded biennially by the Australian Microscopy and Microanalysis Society.

Professor Joanne Etheridge, the Director of the Monash Centre for Electron Microscopy and Professor in the Department of Materials Science and Engineering, won the John Sanders Medal. This medal is awarded for excellence in developing or applying electron microscope techniques in the physical and chemical  sciences and recognises Professor Etheridge’s many innovations in the development of new methods for determining the atomic structure of materials.

Dr Timothy Petersen (School of Physics and Astronomy) won the FEI Company Cowley-Moodie Award for his original research in the physical sciences, specifically, creating electron vortex beams in the electron microscope to provide a novel probe for examining Nature. Monash researchers have won the Cowley-Moodie award on the last three occasions.

The awards were announced this month at the 24th Australian Conference on Microscopy and Microanalysis (ACMM) where several Monash University PhD students were also recognised. Anita D'Angelo (School of Chemistry) won the best student presentation for her talk on electron energy-loss spectroscopy of doped ceria  nanoparticles. Vahid Reza Adineh (Department of Mechanical and Aerospace Engineering) won the AMMRF Image Competition for his striking atom probe tomogram of a bacterium. Yueming Guo (Department of Materials Science and Engineering) was the runner up in the 3-minute thesis competition.

The ACMM is the biennial conference of the Australian Microscopy and Microanalysis Society, attracting nearly 500 local and international delegates, and with a program spanning the biological and physical sciences and x-ray, optical, atom probe and electron microscopies.

All the awards recognise research undertaken in part or in full at the Monash Centre for Electron Microscopy.