At the BOM, Graham Hawke leads others towards a better future 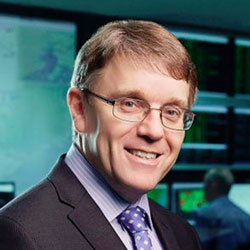 Five years ago, Graham Hawke (BE(Hons) 1981, MEngSc 1992, MBA 2002) arrived at the Bureau of Meteorology (aka “the BOM”). He recognised that, using advanced predictive modelling, its ever-expanding and increasingly exact observational and satellite data could provide local weather and climate insights to decision-makers in government, industry and the community. Until last year, Graham led the Bureau’s Environmental and Research Division. He now heads up the Strategy and Performance Group, describing his responsibilities in two words: “strategic foresight”.

“Like most organisations, our operating environment is dynamic with profound shifts in technology, competitors and customer expectations. As Chief Strategy Officer, my role requires an outward orientation: to look out for opportunity as well as danger, to look out externally, and to look out to the future,” explains Graham. “There is also an inward focus, as we transform our business to provide knowledge, insight and wisdom, working closely with customers, driven by a deep sense of purpose that stems from our vital contribution to saving lives, and helping Australia prosper.”

“Securing ongoing funding for the Bureau's Improving Water Information program, has been my major deliverable, which continues to support national decision-making on Australia's water security,” adds Graham. “Enacted by the Howard and Rudd Governments as a $450 million investment as part of a $13 billion response to the Millennium Drought, the program provides essential information for the water and agriculture sector, and the many industries exposed to our highly variable rainfall and water availability.”

Graham also acts as an Indigenous Champion, chairing the Bureau’s reconciliation efforts through the implementation of its Reconciliation Action Plan. He regularly meets with other Indigenous Champions across the Australian public sector to share insights. Additionally, he aims to provide more opportunity for Aboriginal and Torres Strait Islander staff, recognise and celebrate all important days for Aboriginal and Torres Strait Islanders.

“I recently participated in a Jawun executive leadership visit to Broome and the Kimberley region of Western Australia. Jawun is a terrific partnership between Indigenous and corporate Australia, where secondees are typically placed into remote communities for six weeks to advance projects,” Graham shares. “In the process, Jawun provides an outstanding development opportunity. Staff experience a completely new environment, drawing upon and discovering skills working with the community – they widen their perspectives as well as provide benefits to the host community.”

Graham speaks from the heart about reconciliation: “In just two years, it will be a quarter of a millennium since the first landing of Captain Cook in 1770. While it is easy to despair, I draw hope from the truth encapsulated in this often-quoted phrase: The arc of the moral universe is long, but it bends towards justice. I am optimistic that, in time, Australia will sufficiently unite across its diverse geography and cultures to more fully acknowledge our past, embrace and be further enriched by the longest known living culture on earth.”

Over the years, Graham has been active on a number boards and committees. “There is an intrinsic reward from contributing to some of the most important societal and scientific challenges,” he reveals. “One of the most critical involves earth system modelling, which informs our growing understanding of climate and weather systems, with research powered by the Southern Hemisphere’s fastest supercomputer at National Computational Infrastructure, where I recently served as a Board Director.”

Graham’s dedication has attracted various accolades. In 2016, as Chair of the Water Information Research and Development Alliance management committee, his half of the team won the CSIRO Impact from Science Medal. “The citation recognised value for customers by quantifying Australia's water resources and delivering breakthrough research and innovation in water assessment, forecasting and informatics,” he explains. Also, in 2001, Graham received the Brookes Scholar Award, presented to the two most outstanding students in his Master of Business Administration graduating class.

What lies behind Graham’s continuous success? “I was fortunate to be given early-career operational experience to create and lead semi-autonomous work teams, where managers and staff learnt side by side,” he replies. “Devising more productive and rewarding ways of working provided a springboard to senior executive roles. It was beneficial to be exposed to staff from the shop floor through to the board, learning to read context and respond authentically to multiple viewpoints.”

“Follow and invest in interests that unfold, but recognise that careers can take unexpected twists and turns. Learn by being open to feedback, always holding true to your core values, and remain confident in your capabilities,” advises Graham. “It is often an inspirational person – an outstanding teacher, colleague, or leader - who can spark and nurture growth. Seek out and work with the very best. Enjoy the present, plan and do not be overly anxious about the future. Adapt to a seemingly serendipitous and, at times, hazardous life journey. Find purpose in your work exploits and strive to make a positive difference.”

“Important attributes to growth are being inquisitive, hungry to learn, and taking responsibility for one's own personal and professional development,” concludes Graham. “In this context, I am superficially attracted to the sentiment in the title of former General Electric CEO Jack Welch's book, Control your own destiny or someone else will. But change is constant, and control can be illusive (unless you're a bit like Jack). Instead, if we embrace change as an ongoing transformational process, we can adapt, grow and thrive.”