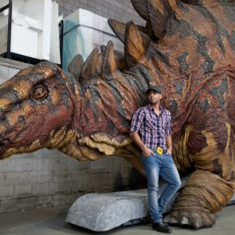 Monash Engineering graduate Avon Perera has entered a new world of training dragons and walking with dinosaurs. Avon completed a double degree in Mechanical Engineering and Industrial Design at Monash University and now utilises his skills everyday at The Creature Technology Company (CTC).

‘CTC was formed in 2006 to create full-scale naturalistic dinosaurs for Walking with Dinosaurs – the Arena Spectacular. Since then we have created a second touring show of Walking with Dinosaurs as well as an ongoing project based on bringing King Kong to the stage. Our latest project is an adaptation of Dreamworks’ “How to Train Your Dragon” movie into an arena spectacular', says Avon.

Avon’s work is inspired by Theo Jansen – a remarkable artist who creates kinetic sculptures - who once said, ‘the walls between art and engineering exist only in our minds’. Avon says his double degree has allowed him to combine his artistic and technical skills and helped him land his dream job.

‘The majority of my role revolves around the mechanical design of (primarily) steel components and mechanisms, so I draw a lot upon the principles taught in the mechanical engineering subjects, as well as the requisite CAD subjects. CAD is pretty much a staple of modern day engineering and really helped the company push the boundaries of creature design and visualisation.’

Avon is currently working within the engineering team as a Design Engineer at CTC. Avon explains the team’s role and how he contributes. ‘The engineering team handles the design and fabrication of any hard components, and essentially creates the steel “bones” and hydraulic “muscles” for the creatures that allows them to move and function. I work with the Creative Director and Chief Engineer in determining locations to put movement axis to allow the creature to execute the actions necessary for an effective performance.’

Avon’s favourite part of his role is seeing the creatures come to life. ‘Definitely the biggest highlight has been seeing these creatures that I’ve had so much time and effort invested in finally coming online and brought to life! The tech rehearsals have just begun in Sydney at Fox studios and it’s just an incredible feeling to watch this amalgamation of steel and foam that I designed over 8 months ago go through its various stages to become almost a living creature. Even though I had a pretty good idea of what it was going to look and move like, there’s absolutely nothing that can prepare you for the impact of a 12m long dragon flapping its wings and roaring at you!’

Monash Engineering graduate Avon Perera has entered a new world of training dragons and walking with dinosaurs. Avon completed a double degree in Mechanical Engineering and Industrial Design at Monash University and now utilises his skills everyday at The Creature Technology Company (CTC).