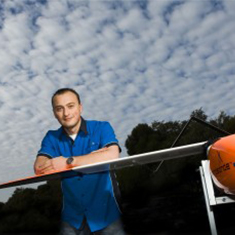 Cameron graduated from Monash in May 2007 with first class honours in a bachelor of Mechanical Engineering and a bachelor of Aerospace Engineering. Whilst at Monash he was an active member of the Monash Aerospace Club, being elected to President in his final year. Upon completion of studies he was offered a full time position as a graduate engineer at Aerosonde.

In 2009 Cameron was promoted to the position of Lead Systems Engineer and since then has been the lead airframe and systems engineer on all major product advancements including wings, several airframe improvements, and a total ground - up redesign of the entire aircraft.

This role not only involved classical engineering duties, but being involved in the manufacture and ground and flight testing of prototype designs; as well as going out into the field as a normal flight line technician and pilot.

Since Cameron left Monash after finishing his undergraduate degree he has enthusiastically participated in activities such as open day, school nights and given a number of presentations, as well as providing input to the recent accreditation of the Mechanical and Aerospace degrees. He has also actively supervised and resourced a number of final year projects, providing an important link to the local aerospace industry.