I have just returned from leading an international study tour for 20 undergraduate Monash civil engineering students, a transformative experience for all involved. Over the course of three weeks, we visited Singapore, Kuala Lumpur, Shanghai and Suzhou to study transport planning. Dr Marilyn Johnson, a Senior Research Fellow at the Monash Institute of Transport Studies, was the other academic staff member on the team and we were also joined by Dr Susi Susilwati, our transport colleague from Monash Malaysia.

The tour was made possible thanks to funding provided by the New Colombo Plan a far-sighted Australian government initiative designed to increase knowledge of our neighbours by supporting Australian undergraduates to study in the region. 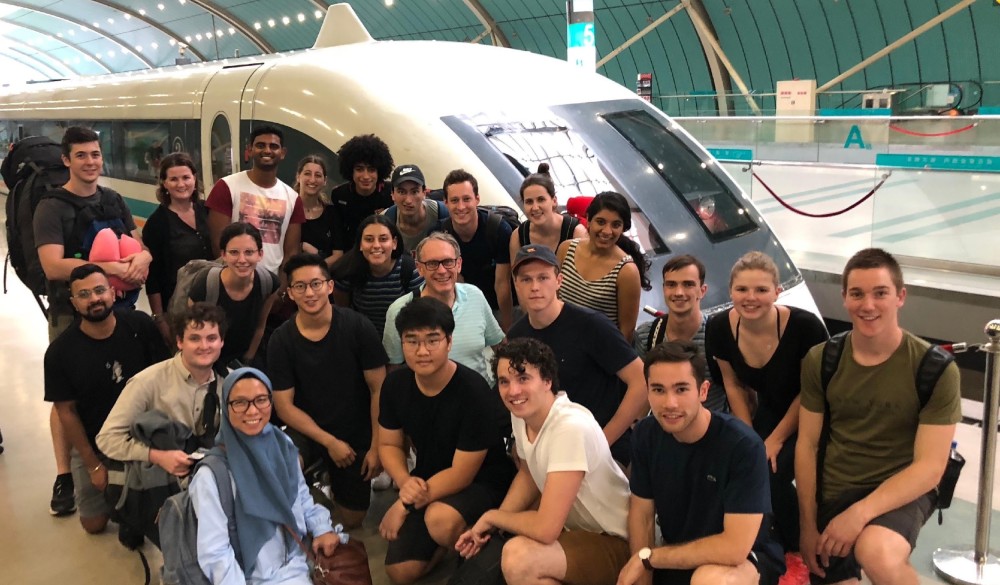 As a tertiary educator, the tour was the most rewarding (and exhausting) activity I have ever undertaken. As the tour was a regular single degree subject undertaken on the move in three weeks, it certainly wasn’t a relaxed sightseeing trip to Asia!

We travelled extensively by public transport in each city which was a valuable field learning opportunity in itself. Riding on the Maglev train in Shanghai and the high speed train from Shanghai to Suzhou, along with driverless light rail and heavy rail systems in Kuala Lumpur, gave the students first-hand experienced with leading edge transport technology.

The program included classroom time at the Monash campuses in Kuala Lumpur, Malaysia and Suzhou (China), along with guest lectures from the Land Transport Authority of Singapore, ARUP, Jacobs, CCDI Consulting and Tongji University. The students completed a group assignment and presentation and sat for an exam at the end of the tour. The students will submit a study tour journal reflection as their final assessment.

The opportunity to see and experience different transport and land use systems has deepened the student’s understanding of the course content. There were many highlights but Transit Oriented Development (TOD) featured in many student’s comments at the end of the tour. Here’s an example:

The most important thing I learned was the concept of TOD, and how to integrate that into different cities and cultures. I really enjoyed learning about different cities around the world that have implemented TOD, such as Curitiba and Vancouver, and then actually seeing it and experiencing it ourselves in Asia.

The tour evaluation survey identified a range of outcomes that I believe speak to the value of the New Colombo Plan in deepening engagement with our nearby neighbours. In the survey, the students responded to a range of statements with overwhelmingly strong agreement on the following points:

A particularly memorable part of the experience reflects the broader impact of programs such as this one. We provided an opportunity for the Suzhou-based Master of Transportation Systems students to interact in small groups with the visiting undergraduate students from Australia. Groups of four Suzhou students and two Australian students got to know each other over dinner in a local restaurant. The following morning, those same groups conducted a field study of a new light rail line in Suzhou. The Australian students appreciated the kindness and generosity of the Chinese students and were surprised to learn that for many of the Suzhou students, this was the first time they’d had the opportunity to speak to young westerners.

One of the visiting Australian students said:

"Spending time with the local Suzhou students was a great experience. It’s one thing to travel and look around China, but it’s a total different thing to have that opportunity to experience that with the locals."

On reflection, the tour was an outstanding experience for everyone involved. While everything worked well,there’s still plenty of scope to reflect on the experience and consider fine tuning future offerings. We fully expect the students will use their learnings from the study tour in their future professional practice.