Generous support from the Jreissati and Meydan families

Fighting the epidemic of the century

A mere 30 years ago, not making your 50th birthday was common for someone with type 1 diabetes. Now, research discoveries and better treatments developed over the past two decades mean that Australians with diabetes typically live to 70 – still 10 years shy of the average life expectancy. But although the outlook for patients is brighter, the number of people living with both type 1 and type 2 diabetes in Australia has exploded to 1.7 million in what has become the biggest health epidemic of the century. 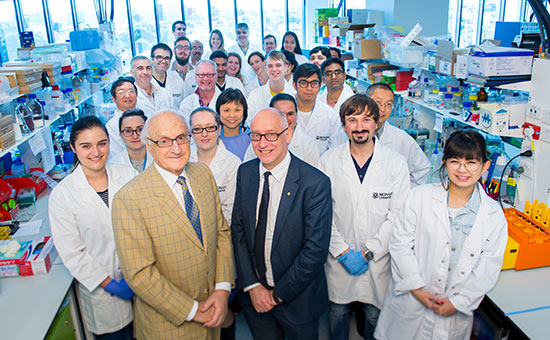 Tackling this challenge is Monash University’s new Department of Diabetes, established in 2017 with the generous support of the Jreissati and Meydan families. Head of Department, Professor Mark Cooper AO (pictured front right), explains that type 1 diabetes is now a condition that can be controlled – but not yet the associated complications of heart, kidney and eye disease. He also points out that before the discovery of insulin nearly a century ago, diabetes was almost always fatal, so the science has come a long way.

Mark and his group are now working to try to determine why glucose damages the heart, kidneys and eyes. This is a crucial step towards developing new treatments and drugs to either prevent, slow or reverse the biggest burden of diabetes – its complications. The research group – long considered one of the world’s best – has made great progress over the years, including their discovery 20 years ago that a particular blood-pressure-lowering drug could reduce kidney disease by 30 per cent.

Mark is confident there are more discoveries in the pipeline, although there are funding frustrations:

“We have about six prototype drugs that are ready for clinical trials, but they are stuck in limbo because research organisations won’t support taking them to the next stage,” Mark says.

“So this is why philanthropy is absolutely critical to us moving at the rapid pace we need to.”

Emeritus Professor Paul Zimmet AO (pictured front left) agrees it is thanks to donors like the Meydan and Jreissati families that the team is able to do world-leading work.

“We can’t do it without them. Their support allows us to be internationally competitive in attracting the funding and talent to make discoveries that have an impact for patients and for the community.”

The Department of Diabetes has already proven itself to be a highly productive environment for more than 60 scientists and researchers to exchange ideas and innovate, with its labs considered the best for diabetes in Australia, if not the world.