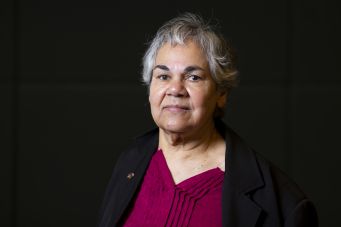 Aunty Diane (DAY-Walker) Singh is a Yorta-Yorta, Wemba-Wemba elder, with ancestral links to the Taungurung people of the Kulin Nation and  the Wiradjuri peoples of New South Wales.

A former enrolled nurse, and alumna of Monash University, Aunty Di gained entry into the university as a mature aged student via the Monash Orientation Scheme for Aborigines (MOSA) in 1990.

MOSA offered mature aged Aboriginal and Torres Strait Islander peoples the opportunity study at Monash upon the completion of either a one year humanities course, or a two year Science course. The MOSA program was the first of its kind in Australia. Aunty Di graduated in 1995 with a Bachelor of Arts.

Aunty Di’s list of achievements is quite remarkable. She has a long history of working in Indigenous education, including her time at the Commonwealth Department of Education, Employment Training and Youth Affairs (DEETYA) at the University of Ballarat (UB), now known as Federation Uni.

In 2003, Aunty Di gained employment with the Centre for Australian Indigenous Studies (CAIS) at Monash for a project being conducted in partnership with the Faculty of Information Technology.

Over her seventeen years at Monash, she has seen many changes, including the various name changes of the Indigenous Engagement Unit, the relocation of the unit, the advancement of Indigenous Employment Strategies, staff changes, and most importantly the growth in student numbers. Aunty Di has also seen the increase in choice of courses and opportunities for Indigenous communities at Monash.

She says, “I like to think that over the years we have all worked as a team, by assisting our students in different ways”.

Aunty Di, who works two days a week at the William Cooper Institute, has also seen her role change from Project Officer to Elder in Residence, a title she has held for the last fourteen years.

Her role is varied, and involves representing the William Cooper Institute, and engaging with our students. She represents us at various Indigenous community events and meetings, training sessions, presentations for Indigenous and non-indigenous students, presentations for staff, meetings with international guests, and more. Another integral part of Aunty Di’s role as Elder in Residence, is to provide support to students wanting to make connections with the local community, or wanting to find out more about their own family history and connections.

The William Cooper Institute is extremely honoured to have Aunty Di.