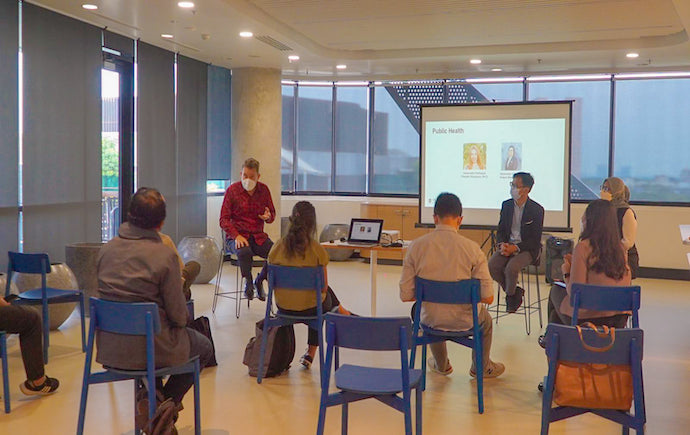 On the same occasion, Monash University Indonesia also offers PhD degree courses, as well as various executive and micro-credential programs for specific sectors. In collaboration with Monash Business School Australia, it is planned that in 2022, there will be three executive programs which include studies on Digital Strategy Transformation in March - April, Fostering Innovation and Leading in June - July and Leading complexity in August - September.

"Representing academics and all existing staff, we are enthusiastic to greet our students face-to-face, after approximately 2 months we have implemented an online learning system," added Professor MacIntyre.

The inclusivity of the Monash University Indonesia campus is also reflected in the information markers in braille in each room, as well as the availability of hearing aid facilities for those in need. In addition, another advantage that Monash University Indonesia has is the presence of a digital library equipped with adequate technological innovation support, as well as a complete collection of digital books.

The Chief Operation Officer (COO) of Monash University Indonesia, Tantia Dian Permata Indah stated that Monash University had made all preparations to welcome the arrival of students which started on January 15.

“The presence of Monash University in Indonesia is actually not too foreign to the local community, as can be seen from the track record that has been built for years. Some tangible evidence of this track record includes various collaborative programs that have been and are being carried out with Indonesian parties, such as the World Mosquito Program (WMP) in collaboration with Gadjah Mada University; RISE program on research on informal settlements and improvement of environmental health, in collaboration with Hasanuddin University; Herb Feith Center which is a centre for Australian-Indonesian studies; ClimateWorks, which is a research collaboration facility for the environmental sector; and several other collaborations,” said Tantia.

“Currently, there are more than 10 qualified Indonesian academic staff who have joined us and in the future, this number will continue to increase. With the support from the academic staff of Monash University, we believe that the dream of Monash University Indonesia that will make a real contribution to the nation can be realized soon," said Tantia.

Monash University Indonesia offers Masters and PhD degree courses, along with a variety of sector-specific executive and micro-credential programs.

Monash University Indonesia is equipped with Monash University Australia standardized learning facilities and is currently opens for new students admissions, as well as scholarships for study in May and October 2022.

Monash has a proud long-term relationship with Indonesia and is a foreign university with the highest number of Indonesian graduates, compared to other foreign universities. The track record of good relations between Monash and Indonesia is manifested in collaborations between the two parties, such as the Herb Feith Centre, RISE, the World Mosquito Program, and the Citarum Action Research Program (CARP).

With a presence on three continents, international partnerships and study abroad programs around the world, Monash is Australia's largest university, ranking in the top 100 universities worldwide. Monash has a dynamic network of research and teaching sites in Australia, Italy, Malaysia, China and India.

The unique alliance with the University of Warwick (UK) sits alongside a series of international collaborations with leading universities and companies around the world, expanding the University's global network.