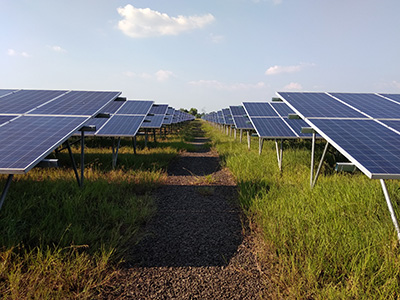 Monash is developing new production methods for ammonia based on electrolysis; that can utilize solar power as an energy source and does not produce CO2. Ammonia is essential as a fertilizer to feed the growing world’s population. Fertilising of agricultural crops uses 80% of the world ammonia production and approximately 200 million tonnes annually is needed. Ammonia is one of the most widely produced chemicals worldwide.

The current industrial ammonia production accounts for more than 1.6% of global CO2 emissions. It is a high energy intensive process, consuming 1-3% of the world’s electrical energy and about 5% of the world’s natural gas production. These problems of CO2 and energy requirements are recognised worldwide and is one of the targeted issues by the newly created Breakthrough Energy Coalition.

Monash has developed a high-efficiency electrochemical process for generating ammonia, either as a gas or in solution. We have identified a novel family of nanostructured electrocatalysts, which, combined with a novel electrolyte, together provide a very significantly increased efficiency of reaction. Our new electro-catalysts selectively and efficiently catalyse reduction of nitrogen to ammonia. These new catalysts overcome the problems associated with previous electrocatalysts that do not have high enough efficiency, catalytic activity and stability for an economically feasible nitrogen reduction process.