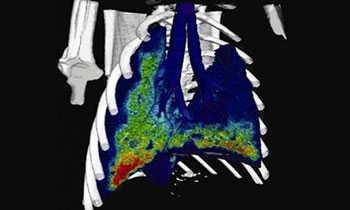 Four-dimensional X-ray imaging technology developed by Monash Engineering provides a state-of-the-art, non-invasive way of understanding real time lung motion and airflow. Until now, medical professionals have only partially been able to achieve this level of detail, through a complicated jigsaw of static images and other diagnostic tools.

4DMedical (formerly 4Dx) is a spinout company formed to offer software services based on this technology. X-ray images acquired using standard equipment are sent to the 4Dx analysis cloud, where quantitative lung function data is extracted and reported back to the physician. In addition to cancer, this imaging technology will provide unprecedented detail for diagnosis and monitoring of respiratory conditions such as chronic obstructive pulmonary disease, cystic fibrosis and asthma. The end result: improving millions of lives through earlier disease detection and more accurate monitoring of chronic respiratory conditions.

Following a highly successful IPO, 4D Medical listed on the ASX in August 2020 with an indicative market cap of $193m. They raised a further $46m in March 2021 and received a $28.9m MRFF Frontier grant through the Australian Lung Health Initiative (ALHI) to develop the world’s first dedicated lung function scanner.

The company's XV Technology™ that provides four-dimensional lung function imaging analysis in real-time has been approved by the FDA and the TGA, including use in Covid-19.