The Institute of Railway Technology recently reached a significant milestone: completing 15 years at Monash University, Australia's largest university and a member of the prestigious Group of Eight (Go8) coalition of universities.

Originally part of BHP's Melbourne Research Laboratories, IRT moved to Monash University in 2000. Within a short period IRT has become recognised as one of the most successful business units within the university, generating significant industry-based research income which has elevated its stature to that of one of the key industry research groups. 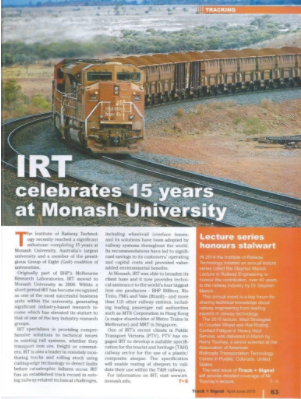